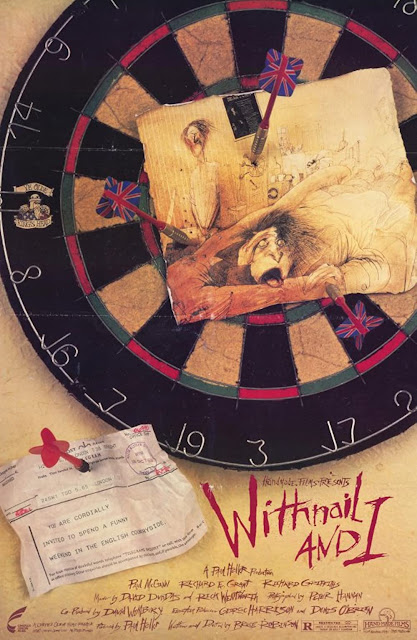 Get in the back of the van, it’s Burl, here to review a picture that I’ll tell you right off the top is one of my favourites! Ha ha and sweet john fiddlesticks, it’s a movie I’ve delighted in ever since it was released, one I find not just beautifully written and acted and made, but extremely funny! And I know I’m not alone in these feelings, though sometimes I wish I were! Of course the film to which I refer is Withnail and I!

Along with The Maltese Falcon, Citizen Kane, The 400 Blows and Night of the Living Dead, I think it’s one of the great feature directorial debuts! That may seem hyperbolic, and it probably is, but I do find it an impressive accomplishment from someone who apparently claimed throughout the shoot that he didn’t know what he was doing! That someone is Bruce Robinson, who followed this up with the okay if not nearly as satisfying How To Get Ahead in Advertising; but he knocked it out of the park on this first go round, that’s for sure!

Our setting is London’s Camden Town in late September and early October of 1969! Two unemployed actors, the titular gentlemen, live in a squalorous flat and drink as much and as frequently as they are able, pausing only to pop pills or drag on enormous joints! Richard E. Grant from L.A. Story is Withnail, while Paul McGann from Alien 3 is I; and their sometime pal and drug dealer, Danny, is played by Ralph Brown, who was in Stoker and was also in Alien 3, ha ha! And there’s even an appearance from Chocolate Mousse himself, Eddie Tagoe of Top Secret fame, here playing Presuming Ed!

Wishing to get out of London for a time, the flatmates cadge a cottage key from Withnail’s florid uncle Monty, played wonderfully by Richard Griffiths from Gorky Park! Accompanied by the guitar stylings of Jimi Hendrix, the lads drive up to the desolate farming mountain of Crow Crag, where the cottage proves nearly as shabby as their London digs, the rain and cold are unceasing, and the promontory decidedly sterile! Ha ha! Not only that, but a rough poacher threatens to put a black pod on Withnail, which terrifies him into a babbling frenzy! Then Monty shows up with a gleam in his eye and the holiday becomes a truly threatening experience for the young, Lennon-bespectacled I!

More of the plot I won’t divulge, mainly because there is no plot really; and that the movie gets away with this so handily is merely another of its charms! It’s a portrait movie: a portrait of these two friends, of this particular moment in time, of London, of poverty, of substance abuse and dependence, of romantic desperation, of career despondency, of the end of an era and the dwindling of hope! “I have of late, but wherefore I know not, lost all my mirth,” soliloquizes Withnail at the end, and we realize it’s exactly that loss of mirth we’ve been witnessing throughout the movie! Ha ha, it’s not the funniest conclusion a comedy ever had, but it’ll stick with you!

Now, while it’s true I’m not a full member of the cult of Withnail and I, which is made up mostly of young (though perhaps now aging), pasty, educated, middle class white men whose principal affectation is the misplaced notion that they have no affectations, but who then go around wearing long coats and tartan scarves right out of the film anyway and quoting lines from it until you want to punch them, I will here admit that not only have I owned coats much like those each of the two titular characters wear, but that I have also, with this movie fully in mind, sat on a bench in the Regent’s Park and swigged directly from a bottle of red wine!

Ha ha, I’ll go further! Though it was not in conscious imitation of the film, I have also roared drunkenly around London from pub to pub in a clapped-out Jaguar! (I was not driving, but the fellow who was had consumed just as much booze as I had, risking not just traffic calamity but police arrest, not having one of Danny’s fresh-pee contraptions on hand!) I have in my time also complained of “a bastard behind the eyes” and bellowed “There must and shall be aspirin!” But I have never obnoxiously demanded the finest wines available to humanity, nor fretted that my thumbs had gone weird, nor wept in butcher’s shops, nor declaimed Hamlet’s soliloquy to wolves! No, I just find the movie well performed and funny and, so far, endlessly rewatchable, and for a’ that, I give Withnail and I four shag-sacks!