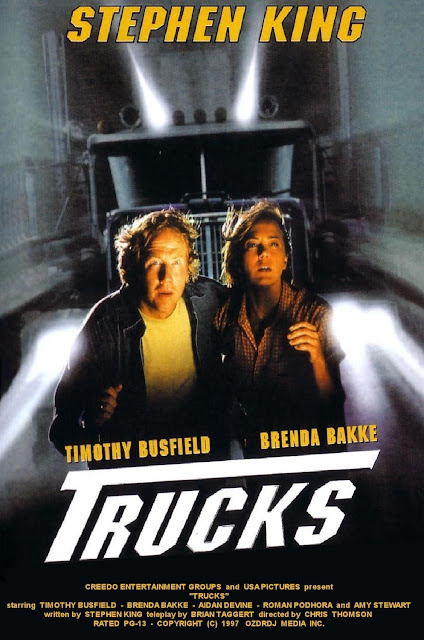 Ha ha and double ha, it’s Burl crying vroom and giving you a review of a vehicular picture from the 90s! In fact it’s a remake of that sweet perennial from 1986, Stephen King’s one and only directorial effort, Maximum Overdrive! I suppose though that the producers of this picture might insist it’s not a remake, but rather a make of the original King short story! And to bolster their claim, the movie carries the same title as that story: Trucks!

Once again we have a little gang of people trapped by living trucks at a roadside choke-and-puke! The action allegedly takes place somewhere near Area 51, and there’s some theorizing about alien control, but otherwise we don’t get an explanation for the behaviour of these vehicles! Unlike the 1986 movie, it’s just trucks who’ve become sentient, not drawbridges, gas pumps, carving knives, video games, or bank machines, ha ha! So this effort is a little more straightforward than King's!

It’s an ensemble movie, but our putative lead is the ginger-haired owner of the little ramshackle rest-a-ree-a, Ray, played by Timothy Busfield, who’s well known from movies like Stripes and Sneakers! He’s got a teenage son called Logan, essayed by Brendan Fletcher from Violent Night and Ginger Snaps 2, and the sleepy, sloe-eyed townslady is Hope – yes, it’s Brenda Bakke from Tales From the Crypt: Demon Knight! There’s Jack, a portly old hippie played by Jay Brazeau from Live Bait; bickering father-daughter duo Thad (Roman Podhora from Jason X) and Abby (Amy Stewart from My Winnipeg); an old counterman played as a Canadian cross between Donald Moffat and M. Emmet Walsh by Victor Cowie from Careful; and an amorous couple essayed by Sharon Bajer from Eye of the Beast and a fellow whose name I did not catch!

From many of these actors and their other credits, you might suss that this movie was made in Canada! It seems that in fact most of it was, but at some point they decided the trucks and the truck stop and all those characters I mentioned were not enough, so they shot some additional, slightly bloodier scenes in California, and these can be identified by the fact that they contain characters which have exactly nothing to do with the plot, and by the beautiful blacktop highways, which stand in marked contrast to the rough grey concrete, spiderwebbed with tarry cracks, that are found in the Canadian scenes! Ha ha! And while I’m getting into the production weeds, I should also make special mention of the work of Ina Hanford, who does a terrific job here!

The California scenes are the movie's goofier ones, and are much less truck-centric; so points for eclecticism but debits for straying, even if slightly, from the theme! These scenes have a hydro man shaken by his boomtruck and electrocuted; a hazmat suit somehow filling with air and becoming an axe murderer; and goofiest of all, an enraged radio-controlled toy 4x4 bursting through a door and slamming a luckless postman to death! Ha ha! Meanwhile, in Manitoba, the motley group huddles in their restaurant watching a parade of about half a dozen belligerent trucks circle the place, occasionally taking out someone dumb, brave, or dumb-brave enough to venture out! All of this is shot without style or pep, is absent of wit or verve, and is certainly unburdened by affrights! The stars don’t seem to be trying too hard – Busfield comes off as a seriously slumming Paul Giamatti being forced to play the role at the point of a gun held just off camera, and Bakke appears to be heavily barbiturated throughout!

So if you thought Maximum Overdrive was pretty bad (if quite a bit of fun!) and that as a director Stephen King makes a pretty good book writer, you’ll be shocked at how much more poorly this story can be told! Trucks demonstrates this amply, having, as it does, the feel of a movie made in a gravel quarry by people with no appreciation of the genre they’re working in or, frankly, any love of cinema! I don’t wish to tar every crew member with this terrible brush, but I will spread disdain like a jam across the whole of the above-the-line personnel! Sure, there are some good movies about angry self-driving vehicles - The Car is terrific, and Christine is a near-gem too – but this is not one of them! Trucks is a cracknel biscuit and no mistake, and I award it one culvert!