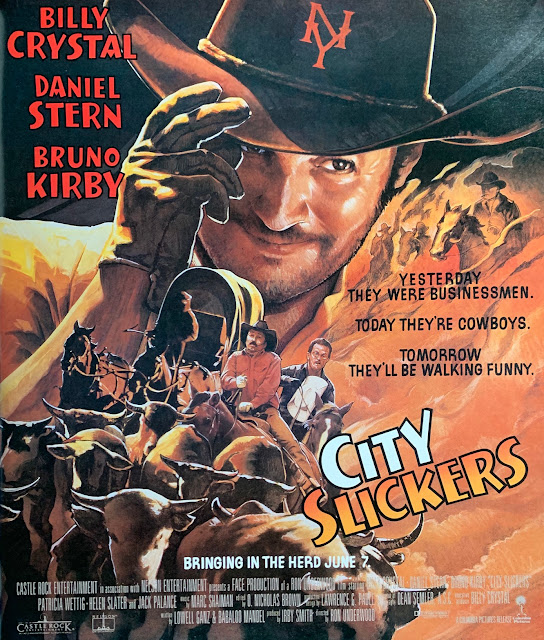 Yee-haw girls and boys and all points in between, it’s Burl, here with a tale of city-slick friendship and cowpunching! Ha ha, I recall that this was a big fat hit when it came out back in June of ’91, but, as with Backdraft, Point Break, and The Rocketeer, movies released that same summer, I didn’t bother seeing it for years and years! I didn’t go to see all that much that summer, as I believe I myself was working on a movie through pretty much all of July and August, but I did make it out to see such gems as Barton Fink, Terminator 2, Slacker, The Commitments, and What About Bob!

All of this is just plain beside the point, because the movie we’re talking about is City Slickers! It’s the simple tale of three New York buddies, each with their own problems, who take two weeks and join a dude ranch cattle drive led by a stern and leathery trail boss! Ha ha, and guess who plays the boss? Well, he won an Oscar for it I guess, so you probably remember that it was none other than Jack Palance from Without Warning!

The middle-aged trio are played by Billy Crystal, whom we remember from the time he was slathered in oldman makeup for The Princess Bride; Bruno Kirby from The Young Graduates and Between the Lines (and of course both Crystal and Kirby were in When Harry Met Sally together); and Daniel Stern from Get Crazy and C.H.U.D.! Stern’s problem is that he has a monstrous wife and that he might have impregnated Yeardley Smith from Maximum Overdrive; Kirby’s conundrum involves resolving whether to settle down with his latest girlfriend and have kids, or continue his life as an aimless, unlikely stickman; and Crystal is, at forty (ha ha!), feeling old and used up and, in the words of his long-suffering wife, has “lost his smile!”

After a long New York build up, she commands him to go and find his smile with his buddies on this cattle drive caper, and then the string of incident begins! Other dude ranchers on the trek include Helen Slater from The Secret of My Success, as the lone pretty lady; Tracey Walter from Repo Man, in charge of the chuckwagon; Josh Mostel from The King of Marvin Gardens and David Paymer from This House Possessed, playing ice cream brothers modeled on Ben and Jerry; and Bill Henderson from Silver Streak as a dentist on the outing with his adult son; and the ranch is owned and operated by Noble Willingham from Butch and Sundance: The Early Days!

The trip is full of gaggery and straight talkin’ 90s man discussions, and the script tries hard to be relatable and sometimes even comes close! There’s also some death and a cow birth and a stampede and assorted other such stuff! Ha ha, I just made up a term for movies like this, which have all the trappings of Westerns but really aren’t themselves Westerns: we’ll call them “faux-ters!” As in oaters, but faux! Do you think the term will catch on, and we’ll soon see it used in all the new academic stuff as well as on random blog posts? Well anyway, it’s a professionally put together comedy movie, quite likeable despite its whole “it’s tough being a straight white guy” vibe, occasionally funny, sometimes cheesy, but for all that, pretty entertaining! Nothing about it is great (though the cast is pretty exceptional) and nothing about it is surprising, and it could have jacked up the Palance a bit, but it’s okay! I’m going to give City Slickers two smiley-faced moons!