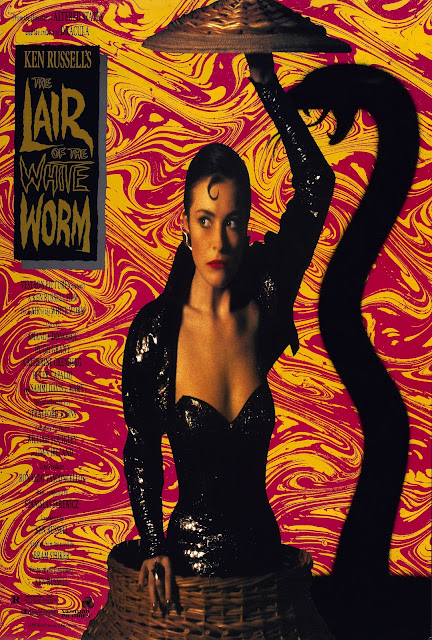 With a touch o’ wurms it’s Burl, here to ponder on a late-80s horror gem that I was fortunate enough to see in the movie theatre with a big responsive crowd! Well, it was a small movie theatre so the crowd was only so big, but the audience responded as though they were watching simply the most uproarious of comedies, and of course in this case that’s entirely apposite! The picture is none other than The Lair of the White Worm!

Ken Russell, who brought us Billion Dollar Brain and many other strange and wonderful pictures, is the madman behind this one! Ha ha, it concerns the Trent sisters, Eve and Mary, played by Catherine Oxenberg and Sammi Davis, who are doing their best to keep the family farm-cum-guest house operating in the wake of their parents’ sudden, mysterious, and total disappearance! Digging in their yard is a young Scottish archeologist called, naturally, Angus, and essayed by Peter Capaldi from Local Hero and Paddington! He finds a big skull that appears to be from some sort of giant reptile, which Russell shoots with a wide lens to make it appear all the more monstrous!

At a party held by the local laird, D’Ampton, played by a voice-cracking Hugh Grant, Angus learns of the local legend of the D’Ampton Worm, to which virgins were sacrificed back in the day! Ha ha, there’s even a song about it performed in the sweaty Celtic rock style! Meanwhile a rich lady called Lady Sylvia, played marvellously by Amanda Donohoe from Starship Troopers 3, returns to her mansion and begins putting the bite on people, starting with an unfortunate boy scout! Ha ha, it seems she’s nearly as reptilian as The Reptile herself! Angus, D’Ampton, and the Trent sisters form a team to try and solve all the mysteries, like what happened to Trent mère and père, is the worm legend for real, who stole the skull, and what’s up with this weirdo Lady Sylvia?

It all comes to a climax with the big worm, Lady Sylvia naked in blue body makeup, one Trent sister hanging over a pit in her underwear and another chained to a wall, and Angus sporting a kilt and producing first a mongoose from his sporran, and later a hand grenade! Ha ha, the theatrical audience I saw the picture with loved all this stuff, and laughed and hooted with great appreciation! (One of the biggest laughs came in the opening credits with the reveal of the cinematographer’s name, Dick Bush! Ha ha, talented guy – he shot Sorcerer, or at least part of it, and Phase IV too – but I guess he got some ribbing at school!)

But the simple fact is that I like this movie! Ha ha, I’m very fond of it indeed! I like the overemphatic musical cues and the frequent use of wide lenses and the touches of wacky gore and the sometimes very goofy acting! Donohoe’s performance in particular is of note – ha ha, she really goes for it, and does a fantastic job! Russell’s tongue is jammed so firmly in his cheek that there might have been bleeding, and there’s a playfulness that most of the cast were in on as well! He maybe tries a little too hard with the hallucination sequences, which have an unfortunate video-y look to them, but they’re a pretty essential part of this eccentric enterprise!

To some viewers, or maybe to most, I suppose it’s all just stupid and silly; and maybe the real worm creature doesn’t look much less fake than the pantomime one seen in the party sequence; and maybe it seems like a parody of a Hammer film, which were parodies of themselves before Hammer stopped making films anyway, and is therefore redundant! I reject all this because the movie is quite simply plenty of fun! Sure, maybe they spend a little too much time loitering in that big cave, but you have to admit, the cave is pretty picturesque! And you can reasonably accuse the movie of not making sense, of being deliberately goofy, of failing to satisfy! I understand most of these criticisms, but I nevertheless give The Lair of the White Worm three games of Snakes & Ladders!