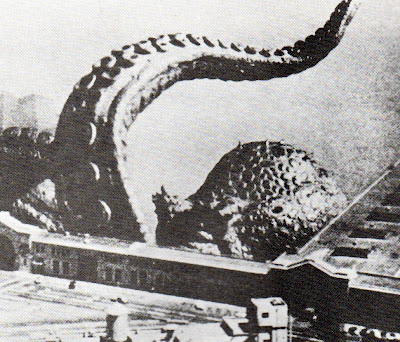 Hi, Burl here! I was pretty sad when, recently, I learned of the passing of Mr. Ray Harryhausen! He was pretty elderly, but still, there’s a significant figure in Hollywood history, pfft, gone! He was a talented man and I doff my cap to his great works! They still and always will look better to me than the digital creatures!
It Came From Beneath the Sea is probably not the best showcase of his work, as it was a low-budget production – legendarily so low that the movie’s enormous killer octopus has only six tentacles instead of eight, ha ha! Even so, the monster is not shown quite as much as it otherwise might be! Nevertheless, a giant killer octopus movie is something ol’ Burl can usually appreciate, unless it’s a cheap CGI picture from the 2000s or later! Ha ha! And yes, you sm*rt alecs out there, I do enjoy Tentacles! Watch for a review coming soon!
But what about It Came From Beneath the Sea? Well, it’s your basic 1950s monster movie in many ways, though here, where they are usually in opposition to some degree, science and military forces work together in harmony to vanquish the beast! In fact, there’s a bit of a science/military love triangle, and it’s dealt with in as amicable and adult a manner as can be imagined!
The movie starts with sub captain Ken “Innerspace” Tobey feeling the squeeze, and later, after several more incidents involving a murderous calamari which has risen from the depths, creature scientists Faith Domergue and John Curtis are brought in! The trio work together, battling not just the beaked terror, but the special feelings that are growing between jarhead Tobey and the lady scientist!
Ha ha, I liked that Domergue’s scientific credentials were never questioned, even though she was – gasp! – an extremely pretty lady; though whenever there’s coffee to be made, guess who ends up making it! But she holds her end up when it comes to octo-battling! And there’s plenty of that by the time the suction-cupped fiend makes its way to San Francisco!
The trick effects in this picture are very nice, I must say! The physics and spatial relations are not always completely within the arena of the plausible, perhaps – how does this stadium-sized beast linger just meters away from the waterline on a beach, ha ha – but if you can forget about that (easy enough!), the movie is full of cephalopodic enjoyments! I was a little disappointed that we never got to see the mighty calamari’s vicious snapping beak, but I guess you can’t have everything! It does slap people down as they’re fleeing in terror along the streets of North Beach, so I guess that’s something!
I find it an enjoyable picture, and the excellent Harryhausen work puts it streets ahead of most 50s creature movies! (Ha ha, I also enjoy all of those, it need hardly be said!) I give It Came From Beneath the Sea two and a half awkward dinners for three!
Posted by Burl at 13:09