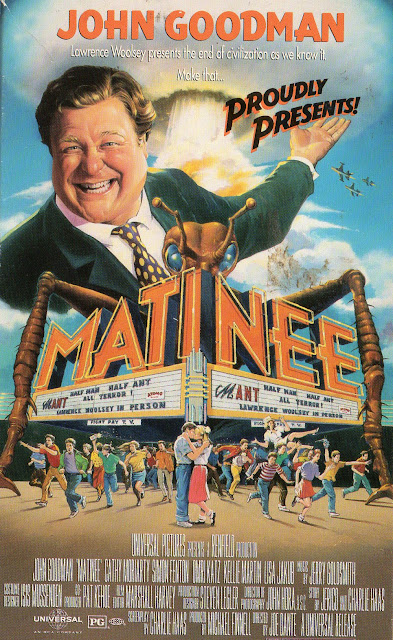 B’dee, b’dee, b’dee, it’s Burl! That “b’dee” business was supposed to be the noise of Twiki the robot for you, but I’m not sure if I spelled it right! And what does Twiki have to do with Joe "Explorers" Dante’s marvelous movie Matinee? Exactly nothing! It was just fun to type, ha ha!
I’ve already tipped my hand, I guess: I’m a fan of Matinee! Not only does it feature such delights as The Shook-Up Shopping Cart (with an early appearance by Naomi Watts of Mulholland Drive fame), but it teams up my favourite actor, Dick Miller, with John Sayles, a director, screenwriter and sometime actor I greatly admire! And plus it has John Goodman in it, straight out of C.H.U.D., and he's an actor I always enjoy, and lots of other stalwarts in the cast too; and the cream in the coffee is a grand re-creation of the 1950 giant monster pictures I love so well!
Ha ha, the picture is set in Key West at the time of the Cuban Missile Crisis! There’s a kid named Gene who loves horror pictures and also a William Castle-like impresario arriving in town to show off his new gimmick-laden monster movie Mant just as the nuclear hysteria reaches its peak! There’s a subplot about another kid who likes a girl, but that girl has an imbecilic, violence-prone boyfriend who just came out of the reformatory and is itching to pound his young rival’s face into face-paste! Ha ha!
And that’s about it for the movie’s story! It’s a movie of incidentals, but our great good fortune as viewers is that these incidentals are so very splendid! You get Miller from Get Crazy and Sayles from Piranha as supposed morality crusaders whipping the citizenry of Key West into anti-Mant outrage! Of course they’re actors hired by Goodman’s Castle stand-in to help publicize the picture! (Miller can be seen standing in the background of the Mant sequences, wearing an army helmet and clutching a huge bag of sugar!) And David Clennon, Palmer from The Thing, is on hand as a beatnik dad! (Ha ha, funny thing - Robert Cornthwaite from The Thing From Another World is in here too, so both versions of the space invader story are represented!)
The Key West setting is very nice, and the period details are grand! If I’d been Gene, I would have had a big crush on the beatnik girl with the ironed hair too! And then there’s Mant itself, from which we are generously shown many scenes, and it’s pretty wonderful! Any student of the 50s big bug movies and/or William Castle will recognize that it’s not exactly accurate – William Castle never made a big bug picture, and based on the elaborate effects, Mant’s budget looks to be bigger than that of Them!, which no other big bug picture ever was! (Them!, by the way, is a great picture, one of my favourites, and not just because it has an exclamation point in the title!) They were also long done with big bug movies by the early Sixties, except for a Fly movie here and there; and frankly the guy who plays the Mant itself has a contemporary-sounding voice that hurts the verisimilitude a bit!
But such inaccuracies are meaningless, since after all the spirit of the era is captured perfectly, and that’s the important thing! The picture’s also often quite funny! It can get a little sentimental here and there, but never too much! If I’d been thirteen or fourteen when I saw this, it probably would have been one of my favourite movies ever! As it stands, it still ranks pretty high! I give Matinee three and a half flying rubber professor movies!
Posted by Burl at 21:01