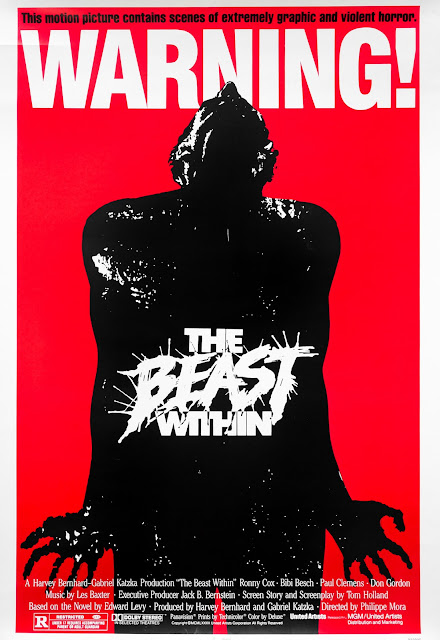 Hah trayah, good friends, it’s Burl, here to review a spookshow that takes place in the o-o-o-o-ol’ Sou-u-u-uth! That’s right, Burlmaniacs, the picture is The Beast Within, the famous were-cicada picture!
Along with The Howling, An American Werewolf in London and Cat People, this was a part of the great Transformation Sweepstakes of the early 1980s! It got lost in the shuffle a little bit I think, because nobody was quite sure what the main kid, played in a very strange performance by horror fan Paul Clemens, is supposed to turn into! I call him a were-cicada, but that’s only because cicadas are mentioned several times, and there’s a parallel drawn between their seventeen-year life cycle and the fact that The McCleary Boy, as he’s most frequently called in the movie, has just turned seventeen and is therefore ready to make his transmorphication!
I’ll back up a bit for those who have not seen the picture or who need a refresher on the plot: Ronny Cox and Bibi Besch play newlyweds who run off the road near the little town of Nioba, Mississippi! Well, Ronny goes off for help and of course Bibi is attacked by a mysterious figure who has just escaped from some kind of basement hideaway! Seventeen years later, their son, The McCleary Boy, is sick with “an occult malignancy,” and the two parents travel back to Nioba to see if they can find any clues to the illness!
One thing I like about the picture is that only some of the townsfolk are in on the conspiracy of silence! Amazingly, the sheriff, played by L.Q. Jones from White Line Fever, just tries to be as helpful as he can, and the doctor is played by the great R.G. Armstrong, from The Car, in one of his rare nice-guy roles! Ha ha, and what a cast, as you can tell just from the names Cox, Jones and Armstrong! There’s also Meshach Taylor, who flew the helicopter with Dick Miller in Explorers, as a deputy! (L.Q. Jones, by the way, gets one of the all-time great introductory lines: “Oral sodomy, eh? Well, that’s why it’s a small town!” Ha ha!)
There’s all sorts of quasi-Southern Gothic happenstance, and when The McCleary Boy arrives in town, the strange murders begin! Other excellent character actors like Logan Ramsay and Luke Askew are killed by The McCleary Boy, who is evidently possessed by the spirit of a fellow who’d been reduced to an animal form by maltreatment at the hands of a local Nioban seventeen years earlier! Ha ha, I think you can connect the dots from there!
And then we get the big transformation! Ha ha, it’s one of the craziest ever put to film, I think! Convincing it’s not (which is partially to be blamed on the effects themselves, and partially, I think, on the way they were photographed), but it’s certainly something to look at! The McCleary Boy, wearing his PJs the whole time, expands and puffs out through the use of bladder effects so egregious you can practically read the word “Trojan” on the pulsating goiters! Soon he turns into a large rugby ball with eyes, and thence into a monster that, when you think back on it, you can’t really remember what it looked like! The monster goes on a little rampage, punching through cinderblock walls and pulling heads off, that sort of thing!
It’s a pretty enjoyable movie, even if it could use a little shoring up in the narrative department! Apparently The McCleary Boy transforms because he’s possessed by the spirit of his father, Billy Collins, who was imprisoned in a root cellar and passed the time by practicing Indian Magic he’d learned from his pal Tom Laws, and that magic was something called The Changing Game, which for whatever reason was connected with the cicadas and their lifestyle! But ha ha, you wouldn’t know any of that from the movie – I only learned it from reading an interview with Paul Clemens!