Burl reviews Humanoids From the Deep! (1980) 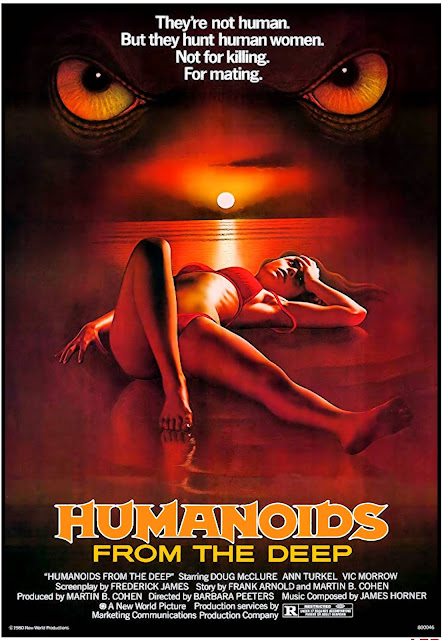 Blub-blub, it’s Burl, here with monster terror from beneath the waves! It’s New World Pictures time, and more specifically it’s one of their early-80s monster pictures, like Galaxy of Terror and Forbidden World, the kind of thing they were loading full of gore and monsters and nudity and all the stuff that the drive-in patrons of the day truly appreciated! The picture in question is none other than the notorious Humanoids From the Deep!
Now, ha ha, I’ll get into the major notoriety issues later, but first we should address that inaccurate title! For, while the monsters do indeed swim and come up from the water, they never seem to get very deep, and they certainly don’t live in the depths! No, they dwell in the caves and indents of the Pacific Northwest coast, specifically around the small fishing town of Noyo, home of the Salmon Fest!
Doug McClure from Tapeheads and 52 Pick Up is the fisherman hero, a little reminiscent of the Tom Atkins character in The Fog; and while he has an appealing teddy bear presence, by the climax he’s getting some pretty weird ideas! Anyway, it seems that the fishing around Noyo has been poor of late, and meanwhile a big company is thinking of opening a cannery in the area! Most of the townsfolk, including the town jerk played by Vic Morrow, are for the cannery, but the local Indigenous population doesn’t want their land appropriated and their waters polluted! It’s a reasonable position, but tensions are at a boiling point, and when something kills all the dogs who hang out at the pier, a big fistfight is the result!
Most of the actors have to spend the rest of the picture with bruise and abrasion makeups on their faces as a result of this fistfight! They all putt-putt around in little boats with tiny Johnson motors on them, while Morrow and his boys spy and plot strategies against the Indigenous folks! Meanwhile, humanoids created by the young, hungry, and unstoppable trick effects genius Rob Bottin are popping up here and there, slashing at the menfolk with their big long arms and forcing themselves upon the community’s ample stock of young women! For a movie directed by a woman, Barbara Peeters, it seems awfully rapey, but thankfully these scenes - which, indeed, may have been added later by male filmmakers, thus the controversy - are displayed in quick cuts and without much detail; but they’re still most unsavory!
After McClure, his buddy Johnny Eagle, and the lady scientist from the canning company played by Ann Turkel have an encounter with the fishmen and manage to kill a few of them and bring one back to the town, it becomes apparent what scale (ha ha!) of problem Noyo has! Turkel admits that her salmon experiments must have gone terribly wrong! Urgent, immediate action is clearly required, so she shows her new friends a film about frogs! But in the meantime Noyo’s Salmon Festival is about to commence, with the funfair action on the harborside pier, and the local radio announcer celebrating by pronouncing the L in “salmon;” and the next thing you know humanoids are busting up all over, slaughtering folk, slashing at them, pulling off their heads, or just plain ripping off their brassieres! It’s the Corman exploitation philosophy in a seven-minute nutshell, and on some level you’ve simply got to admire it! And Peeters carries it all off with real conviction, ha ha!
Not everything makes sense, though! McClure’s idea to firehose fuel all over the place and set the harbor adjacent to the funfair on fire is a decidedly odd one, and doesn’t help things in any way! Is it an attempt to burn up the creatures, or merely to distract them? He manages to shoot one or two humanoids, but otherwise this supposed hero is virtually useless!
And then there’s the footage Peeters didn’t even shoot - the extra added rape stuff, and the bellybusting birth scene at the end! The knowledge that these were added by male filmmakers after the real director, a woman, was given a pat on the head and told to go home gives the whole thing a distinctly skeevy, unpleasantly old-fashioned edge! But at the same time, if you make the effort, it’s possible to watch Humanoids from the Deep and see the marvelously unpretentious B-movie Peeters intended to make! It’s well-crafted, decently acted, and punches well above its weight in areas such as James Horner's score and Bottin's trick makeup effects! Ha ha, I give Humanoids from the Deep two groovy brown ca-trucks!