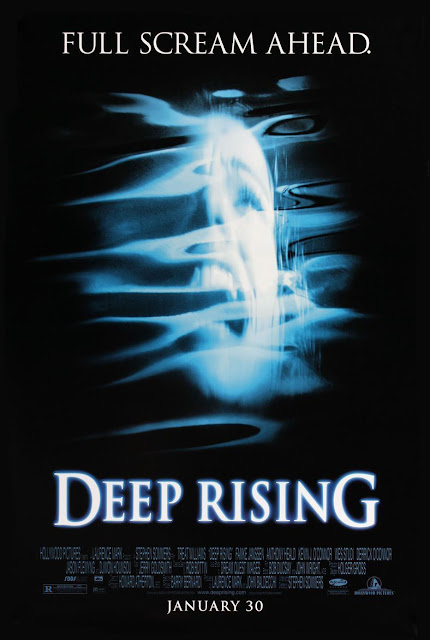 Ahoy mateys, it’s Burl, here to review some ocean-going action-horror! Ha ha, here’s yet another 90s movie I saw on the big screen with my friend Pellonpäa, and which we both thoroughly enjoyed at the time! I still think the movie is pretty fun, while not hesitating to acknowledge that it’s also plenty dumb! The picture in question is quite simply Deep Rising!

Treat Williams from Dead Heat is our wry, world-weary hero, a boatsman who rents out his captaining services to any sketchy characters who might require them! His customers are a gang of mercenaries led by Wes Studi, who was in Heat and The Last of the Mohicans and plenty of other pictures, and their mission involves being taken out into the middle of the Pacific Ocean by Treat’s fastboat! Treat’s crew is comprised of a squirrely straggle-hair called Joey, played by Kevin J. O’Connor, whom we recall from playing Hemingway in The Moderns and of course from his role as a thug in One More Saturday Night, and a tough lady played by Una Damon, who I think maybe should have been the hero of the picture instead of just another tentacle victim!

Ha ha, tentacle victim, you ask? Well, there’s plenty of them among Studi’s band of thugs, which includes Cliff Curtis from Collateral Damage and other familiar tough-guy faces like Djimon Hounsou and Clifton Powell and Jason Flemyng! But we’re getting ahead of ourselves! The mercenaries’ goal, and the location upon which most of the action takes place, is a fancy cruise ship owned by a glasses-weasel named Canton, played by Anthony Heald from The Silence of the Lambs and The Beniker Gang, and he has disabled the ship so it can be plundered by the mercenaries and subsequently sunk, and then he can collect on the insurance!

But that’s when the tentacle monster, or monsters, from beneath the sea attack! I guess it’s just supposed to be one blob-headed creature who gets into the ship somehow and devours people with its tentacles, which have mouths on them, or maybe each tentacle was its own thing! The biology of the monster is a bit confusing, frankly, because each tentacle has a mouth and seems to express emotions like rage or slyness, and then the blob has its own mouth, with which it roars and tries to eat the hero!

Famke Janssen from GoldenEye is on board the ship too, playing a jewel thief whose incarceration in the brig saves her life; and the bulk of the picture is the group of people being steadily reduced by tentacle attacks as they try to either make it back to Treat’s fastboat or else start the ship up and call for help! Ha ha, their plans are a little scattershot, frankly! But there are some good gloopy scenes along the way, like the poor half-digested fellow who can’t believe the straits he’s found himself in, as well as some moderately clever badinage here and there! O’Connor’s whiny, beret-wearing stragglehair is a bit hard to take at times, but Williams does the ethically-shaky hero bit well, if not memorably!

It’s silly but occasionally spectacular, and I recall it being a fun time at the moviehouse! It was sillier still but nearly as enjoyable to watch it more recently on home video, so I give Deep Rising two sideways windshield wipers!
Posted by Burl at 13:06