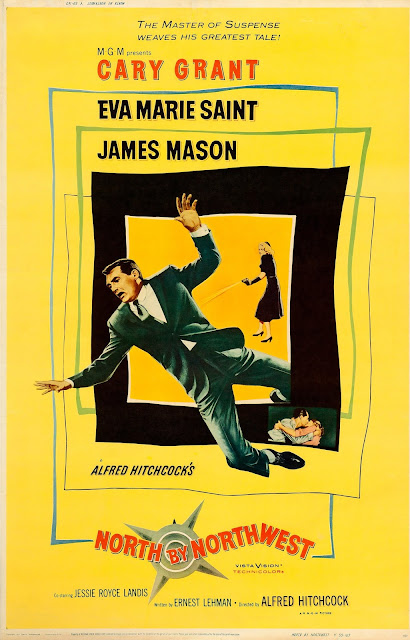 Hi, I’m Roger Thornhill! Ha ha, no, I’m Burl, but I feel like Roger Thornhill after my recent viewing of North By Northwest! Yes, it’s a comfy old favourite, a highly rewatchable thrill-omedy-omance, and always pretty fun! There’s not much more to it than that, other than some romantic scenes that go on a bit too long for young new viewers of Hitchcock; but by garr it’s a pleasantly airy jaunt! It feels a bit silly to review it, because everyone’s seen it and everyone more or less likes it!

It’s a curious warm-up for Psycho, ha ha! Our main character, played by the one and only Cary Grant, is a happy-go-lucky Madison Avenue man who gets mistaken for a government spy called George Kaplan! Immediately he is wrapped in a web of intrigue: kidnapped and assaulted with a gun and a car and a bourbon by nefarious bad guy James Mason, whom we know from ffolkes and Bigger Than Life; his dapper, Smithers-type minion Martin Landau, an actor we recollect from his appearance in Without Warning; and two sinister, hatched-faced sub-minions! Poor perplexed Thornhill is soon accused of a United Nations murder, and he flees to Chicago on a cross-country train! On board he meets an almost psychotically flirtatious blonde beauty played by Eva Marie Saint from The Curse of King Tut’s Tomb, whose extreme willingness to shelter an accused murderer arouses only mild additional bewilderment in Thornhill!

Leo G. Carroll from Tarantula is meanwhile a government spymaster who knows what’s going on, but is initially pleased to hear that Thornhill is believed to be Kaplan, who is not a real person but a fictional CIA confabulation! Ha ha, I think the movie could have waited on this revelation and presented it as a twist going into the third act, instead of revealing it in the first, but that’s just one Burl’s opinion! Anyway, with crop duster cornfield chases and hotel room duplicities and the finale in that fantastic modern house apparently perched near the top of Mount Rushmore, we barely notice!

Ha ha, there is so much window dressing to love about this movie - the great Saul Bass titles, the fantastic Bernard Herrman score, the clever Ernest Lehman script, and of course Hitch’s confident direction and the suspense scenes he pulls off with typical wizardry - that we don’t quite mind realizing later that it’s pretty much all window dressing! However, aside from the romantic longeurs mentioned earlier, it’s a top-flight Hollywood entertainment, attractive and shiny, gripping and funny; and when it’s over, it’s over - ha ha, until the next time! It’s far from my favourite Hitchcock picture, but it’s like a gooseberry you keep under your armpit: always there for you! I give North By Northwest three complaints of dan-druff!