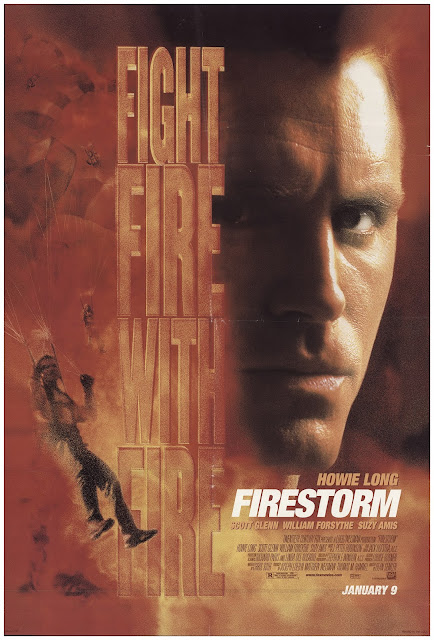 With a snap, a crackle, and a pop, Burl is here to review you a movie about fierce forest fires and the folk who fight them! It’s 90s Hollywood action yet again, and this picture, along with Eraser, got me thinking about that particular category of motion picture! You’ve got your minor classics, like Speed and Face-Off and The Fugitive, and then your successful-but-middling works, like Point Break, The Rock, Con Air, The Last Boy Scout, Cliffhanger, Air Force One, Under Siege, Passenger 57, so forth! And then again you have a whole different category: movies that some studio or other (usually Fox) made in imitation of either Speed or Die Hard or some combination of the two, but that ended up as anonymous video-store fodder, remembered by few and cherished by none! These titles include buntonics like Chain Reaction, Mercury Rising, Hard Rain, Chill Factor, Striking Distance, and today’s picture, Firestorm, which I’m forced by circumstance to report might be the worst of them!

Our hero in this endeavour is not a cop but a fighter of forest fires, and the fellow playing him is not an actor but instead famed pigskinsman Howie Long, wearing a perpetually blurred and startled look in the role of Jessie the smokejumper! Ha ha, the picture opens with its most professionally-directed scene, in which Jessie and his mentor Wynt, played by Scott Glenn from The Keep and The Right Stuff, must rescue a little girl from a house in the burning forest! Wynt is injured, which leads to his part in the drama becoming strangely similar to the one Glenn undertook in another flame-based actiondrama, Backdraft!

Meanwhile a slightly clever but also completely goofy jailbreak is enacted by a fancy-talkin’ robber-killer played by William Forsythe from Cloak & Dagger and Extreme Prejudice! As a purposefully-started forest fire rages on the mountain, he and a band of confrères escape from the ridiculously low-security work detail they’re on, and in their new guise as a group of Alberta-based firefighters, adopt ridiculous Canookian accents straight out of Canadian Bacon! Ha ha!

Suzy Amis from Fandango turns up as an ornithologist who’s not just an ornithologist but has been relentlessly trained by her father in the art of being a Marine, and that ridiculous confluence of characteristics is typical of this picture! Once the perennially baffled Jessie figures out that the constant litany of “eh?” from the would-be Canadian firefighters is counterfeit, he and Amis are on the run! Fortunately for him, but unfortunately for the thrill ratio of the movie, Forsythe’s baddie is killing off all his buddies himself, leaving Jessie nothing to do except run away! Ha ha, he does fight one of the henchmen, but is left prone and defeated beneath a pile of camping equipment while the henchman is finished off by Forsythe!

Jessie himself has a gang of pals, including familiar faces like Christiane Hirt from Malone and Michael Greyeyes from Blood Quantum, but they all mostly stay put at headquarters and never become a part of the action! Meanwhile the movie degenerates into a display floor of blundered potential and missed opportunity! A situation involving a group of people trapped on a bus might have had plenty of suspense wrung from it, but instead it turns out to be merely the setup for a weakly-executed gag! Jessie talks about trees and rocks exploding, but we never see that happen; and the climactic firestorm is just a digital mess that looks like some kind of 90s-era screen saver! Ha ha, we do get a moment involving somebody’s head igniting like a match, but that’s small recompense!

The picture was directed by talented cinematographer Dean Semler, who shot City Slickers and Mad Max Beyond Thunderdome, and this hire was clearly part of the studio’s attempt to recapture the magic of Speed or The Fugitive, also directed by cameramen! But like other photographer-directed 90s actioners, Chill Factor or Hard Rain for instance, it was in the end a failed gambit - it’s hard to know whether the actors or the action were more poorly served by Semler’s inexperience behind the megaphone! The storytelling is a mess, thanks to the lousy script as well as the confused direction; the dialogue is laughably lousy; and the hero is virtually indistinguishable from the trees he’s trying to save! It’s the lowest ebb of 90s studio action, so I give Firestorm one groundpounder!
Posted by Burl at 10:34