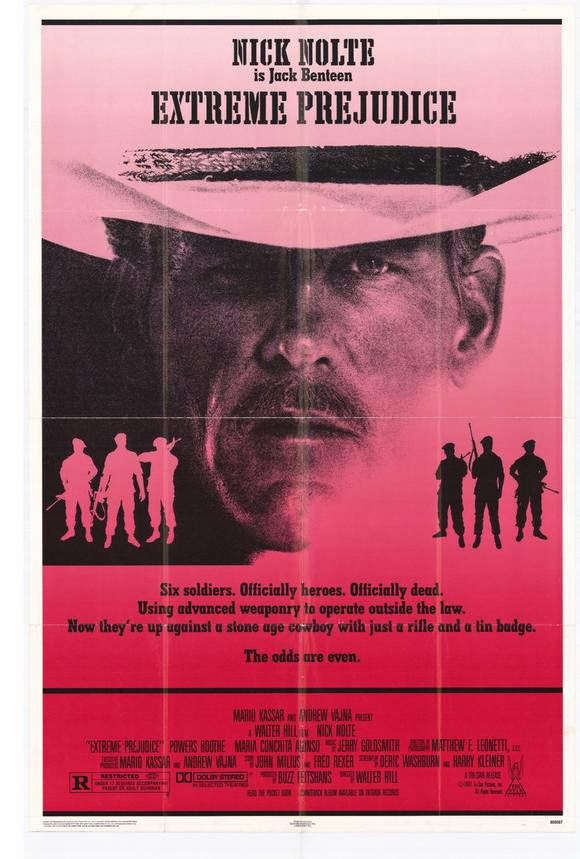 Budda-budda-budda, bang, bing pip-pip-pip twa-a-a-ang, it’s Burl! Ha ha, those firearm sounds signal that I have another popgun action picture to review for you today! The movie is called Extreme Prejudice, and it’s the age-old chestnut of two pals who grow apart, battle over a lady and end up on opposite sides of the law!
Nick Nolte plays Jack Benteen, which I suppose is meant to be a tough-guy name but sounds to me more like a mass-market unguent! His great friend-nemesis is, ha ha, “Cash Bailey,” played by Powers Booth! It’s great to have a guy with a name that isn’t a name played by another guy with a name that isn’t a name, ha ha! Anyway, Jack and Cash both like the same lady, Maria Conchita Alonso, whom we know from Fear City and The Running Man! Also, Jack is a Texas Ranger and Cash is a big-time dealer of mind drugs!
But there’s more! First we have Rip Torn, known for movies like Payday and Tropic of Cancer and Summer Rental, and for putting a punching on Norman Mailer, as Jack’s tough sheriff buddy; and then there’s also a mysterious gang of hard cases who are apparently government spooks on some kind of mission! It’s a real gallery of gumboots here: we have their leader, Michael “Total Recall” Ironside; we have Clancy Brown from The Adventures of Buckaroo Banzai and Highlander; William Forsythe from The Substitute; Tiny Lister from Blue City and Armed & Dangerous, and others!
All of these fellows act out their tough-guy routines in the Texas desert There’s a bank robbery which is meant as cover activity for the paramilitary chums, and there’s plenty of gunfire and large holes being blasted in people! Ha ha, all this mayhem is orchestrated with great competence by Walter “Brewster’s Millions and Streets of Fire” Hill, who quite obviously watched The Wild Bunch the night before filming began on this baby! Why, he might even have watched it twice – just look at what Cash does to that scorpion!
This is one of those pictures which entertain reasonably well while they’re on, but fade from the memory very quickly afterward! It’s very professionally made, but if there’s anything worthy of note about it, it’s that cast! Nick Nolte is a growly old bear, of course, and old Powers plays a bad guy every bit as well as he does in Sudden Death, which is saying something! Ironside and his gang get lots of good moments too!
But in the end there’s just not much to it! If this is the sort of thing you want to watch, then this is the sort of thing you’ll want to watch, ha ha! It’s unexceptional 80s action, but it does have a very warm-weather desert atmosphere to it, so it makes for good winter viewing, especially in such a brutal winter as many of us are experiencing this year! So that gives it an extra nudge in my unique ratings system, and in the end I’m going to give Extreme Prejudice two unfortunate scorpions!
Posted by Burl at 19:28