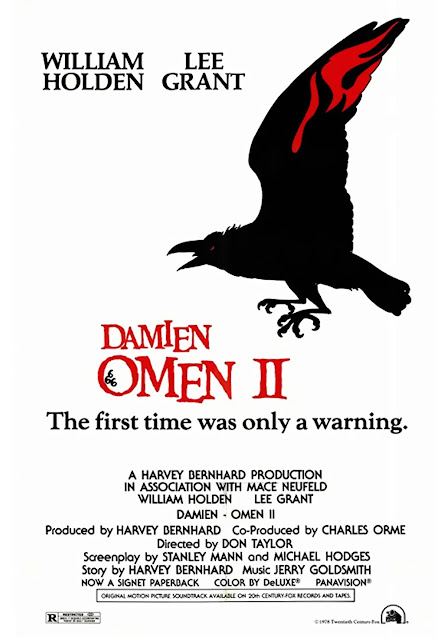 Wahhh duu wahhh, it’s Burl, back with yet another tale of demonio-religious horror! This one is the sequel to The Omen, of course, and for some reason they gave it the title Damien: Omen II! This had the curious result of giving a whole, particularly stupid generation the idea that the proper name for all the films in the series is Damien Omen Child! In my video store days I had to rent the movies to these nudniks, so I know what I’m talking about! “Ha ha, did you want Damien Omen Child 1, Damien Omen Child 2, or Damien Omen Child 3?” I eventually found myself asking!

This one picks up with what seems like a scene cut from the earlier installment, following the archeologist Bugenhagen as he drives around like a madman in his jeep! As in the first installment he's played, uncredited as always, by Leo McKern from X the Unknown! He brings his pal, played by Ian Hendry from Get Carter, down underground to see a special wall upon which images of the devil have been painted, and what do you know: it’s Damien Omen Child! But then the devil immediately kills them!

Seven years later Damien Omen Child is living with his uncle and aunt, played by William Holden from The Towering Inferno and When Time Ran Out and Lee Grant, who was in Mulholland Drive and directed Staying Together! Ha ha! Sylvia Sidney from Snowbeast is the old aunt, and of course immediately she expresses a distaste for Damien Omen Child, the devil kills her! Here the movie settles into a pattern: somebody finds out something weird about Damien, sound crazy to other people when they try to explain what they’ve discovered, and then the devil kills them!

The devil’s victims include, roughly in order of introduction and demise, Elizabeth Shepherd from Head Office as a lady reporter who gets her eyes pecked out and then is creamed by a truck; Lew Ayres from ‘Salem’s Lot as a Thorn Corporation executive who falls through the ice and drowns; Allan Arbus from The Last Married Couple in America, another Thorn employee, who suffers blowsy at a pesticide factory; Meschach Taylor from The Beast Within, as a doctor who realizes Damien has jackal blood and is immediately bisected by a runaway elevator cable (the picture’s most elaborate, spectacular, and gory death); and Nicholas Pryor from Executive Decision, who loses his nut and gets hit by a train!

But it’s not as though everyone is against Damien Omen Child, oh no! He has some pals! The devilish lad is attending a military academy, where Lance Henrikson from Aliens and Pumpkinhead is large and in charge as a satanic sarge, and where Damien Omen Child gradually unweaves his own identity; and meanwhile Robert Foxworth from Prophecy and Ants! plays a weasely Thorn Corp. exec who reveres the cloven-footed one, and on the side is trying to effect some kind of nasty scheme involving the global food supply, though I confess I never figured out exactly what he was up to! Most of the movie is the devil murders, spaced out as regularly as stations on a subway line, and like his predecessor Gregory Peck, Holden takes forever to cotton on to the deviltry in his midst! Ha ha, he never seems to think it strange that everyone he knows is dying by freak deaths, even when that fact is pointed out to him!

It’s one of those Hollywood lumpuses, put together stolidly by veterans with no real motivation or instinct to transgress! There’s a general curiosity about what’s going to happen, renewed every ten minutes or so with a devil killing, but no sense of gathering doom, no atmosphere, no apocalypse, no affrights! On the other hand there’s a general Hollywood craftsmanship and a couple of memorable moments, and you get talents like Jerry Goldsmith plying their crafts! It’s still square oldtimer huggermugger though, and I give Damien: Omen II one and a half exploding furnaces!