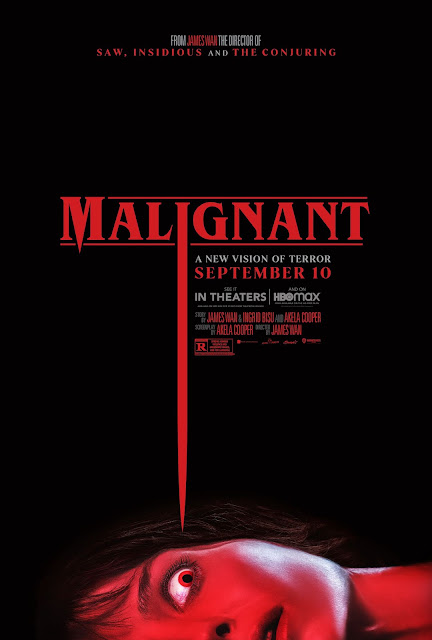 Well hello friends, it’s Burl here! Ha ha, I’ve just returned from the movie theatre after my first visit to one of those hallowed temples in I don’t know how long! The last movie I saw in the theatre before this might have been Parasite, or maybe The Twentieth Century, or, ha ha, possibly even All For The Love Of A Skywalker! And finally I returned, knowing I could not stay away forever, to see a horror picture called Malignant!

Now this is that fellow James Wan, once again making a horror picture in the same spirit as he did Insidious! This one has a more generous budget than that previous movie however, and the extra spending shows in the second half when it almost becomes a sort of terror super-anti-hero picture in the vein of Brightburn or The New Mutants! And in retrospect the picture plays a lot more like a superhero origin story than one might suspect from the first few reels!

After a prelude set in an impressive-looking matte painting of a towering cliff-side hospital, we meet our protagonist, Madison, a pretty, pregnant nurse who drives a wood-paneled 1970s Toyota Corolla and lives in a huge house she’s decorated as if she was a mid-century grandma! She looks beaten down by life, and no wonder: she’s married to an abusive boor whom you know from the very moment he appears is destined for a gruesome but gratifying death!

And that happens soon enough, but not before poor Madison has suffered a headknock and a miscarriage! And now there’s a murder mystery to be solved, and cops played by George Young from In the Room and Michole Briana White from Volcano are on the case, and Madison is reconnecting with her devoted sister Sydney! Confunction among the flatfeet sets in immediately however, and is not ameliorated by subsequent murders in which a set of doctors are brutally slain by an acrobatic stragglehair! Who is this coat-wearing killer? Could he truly be the imaginary friend Madison talked to on the phone back in her unremembered childhood á la Poltergeist II? Ha ha, maybe!

I wouldn’t dream of giving away the whys and wherefores of what’s really going on, but if you’ve seen pictures like Basket Case, The Brood, and The Dark Half, with perhaps a side order of Fight Club, I, Madman, and Brain Dead, you’re halfway there! This isn’t to suggest that Malignant is just a big rip-off festival, or that it’s built entirely out of spare parts, but even if it was, the real question is how much skill is employed in presenting these previously-owned elements!

Well, quite a bit! Some of the frightpieces are not as fleshed out as they might be, whereas other scenes leave it all on the field, ha ha; and the central reveal is handled well, I thought! The killer has a habit of inflicting horrible compound fractures on people, so we get a bit of bone-snapping gore, and there’s a scene in a jail cell and then a subsequent one in a police station that leaves the walls splattered with blood! Ha ha, the police station is a funny place, though, because it really looks more like a boutique hotel, even in the bathrooms! Yes, the production design is a bit goofy here!

The picture is set in Seattle like The Ring, and as in that movie too, VHS tapes play a prominent role! But it never managed to creep me out as much as The Ring! That hospital had possibilities, but it only appears in the prologue and one short, purely expository scene later on! The Seattle location is exploited in a neat and informative way, though, with the introduction of a lower level of the city that lies below the streets as they exist today! Ha ha, this sounds like something worthy of its own movie!

It was a fun time out at the movies, though. and I liked all the Special Makeup Effects and gore, even if some of the splattering blood was a little CG! A part of the score they used several times always seemed about to break into Where Is My Mind? by the Pixies, but it never did, and then I found out from the end credits that it was indeed supposed to be a cover version of that song! And also it was nice to hear a reference to the guy from Goonies! It’s not one of the New Classics or anything, but I enjoyed myself, especially so because I was watching it in a movie theatre! I give Malignant two and a half disco suits!

Email ThisBlogThis!Share to TwitterShare to FacebookShare to Pinterest
Labels: 21st century, action, horror, monster, saw it on the big screen