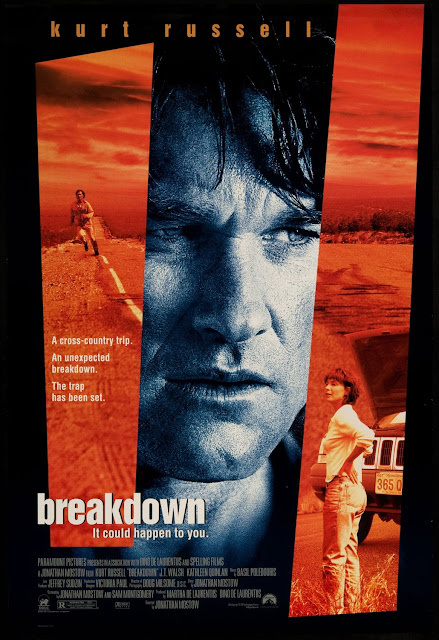 Shakedown, breakdown, it’s Burl, here to review a simple story of 90s automotive mystery-action! Ha ha, you might be thinking that this must be a review of Switchback, but no, it’s another Paramount Pictures production entirely! In fact this is Breakdown, a leanly-told tale of dastardly truckers and a missing wife!

Kurt Russell from The Thing and Big Trouble in Little China and Kathleen Quinlan from Wild Thing and Apollo 13 are a husband and wife hoping to start a new life out West! Russell here is in the same blando button-down Everyman mode he adopts in other 90s thrillers like Unlawful Entry and Executive Decision, and when, in the middle of the desert, their car suffers the titular event, Quinlan takes off to fetch a tow truck with a seemingly friendly trucker played by J.T. Walsh from Misery! But when Russell gets his vehicle started by himself and proceeds to the next service station to find his wife, he discovers she isn’t there and never was, and the local hayseeds claim they never saw no one lookin’ like her!

Well, it’s a conundrum! Russell is worried, and through a series of investigations and confrontations, and without allies on these dusty plains, he manages to overcome his tucked-in personality and track down his wife! Of course Walsh is the villain behind it all, ha ha, it’s no surprise to find that out, and he’s got a little gang of co-conspirators which includes such professional low-lifes as M. C. Gainey from Con Air! The more interesting discovery is that when Walsh is not trucking or kidnapping or demanding ransom, he’s a warm family man with a wife and son! He also has a padlocked stay-hole in his barn however, so there’s that, ha ha!

Familyman or not, he’s an altogether nasty customer, and so there’s great sadistic pleasure in watching him and his underlings get their just desserts! Along the way there are some short, efficiently-directed action scenes and a fair soupçon of suspense, and it all wraps up in a tight ninety-something minutes! This all amounts to a mid-level programmer of the old school, making up in solidity what it lacks in ambition! Everybody involved did just the job that was required of them, even if, as in the case of Quinlan, that job was far below their actual talents! She’s too good an actor just to be kidnapped and put into a bag; but on the other hand the movie serves as a very good showcase for Walsh and his particular set of skills!

This is one of the many sorts of movies they just don’t make any more, and while it doesn’t count as the greatest of tragedies, I still miss this sort of thing: that is, the kind of picture that you feel a natural urge to take the afternoon off and go see with a box of hot buttered corn in your lap! Maybe what I’m really lamenting are the bygone days when I would or could go and do that at all, movie type notwithstanding; but in any case, little hard-edged genre pictures like Breakdown come with a slight patina of reminiscence and regret! But they also come with plenty of simple pleasure, and so I give Breakdown two and a half doughnut packages!