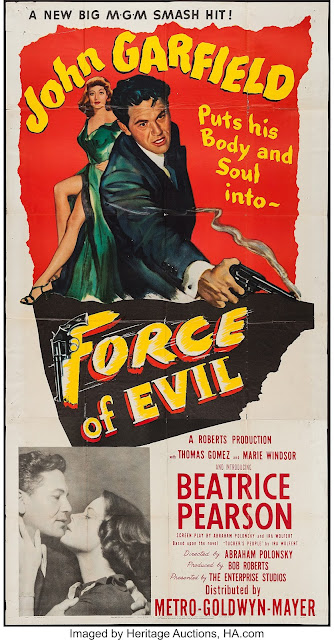 Ha ha, it’s Burl here with some political noir for you! This is the first picture made by Abraham Polonsky, a cool guy who got himself blacklisted for not naming names, while his own name was named by The Long Goodbye’s Sterling Hayden, who regretted doing it all the rest of his life! Polonsky was a Marxist practically from cradle to grave, but, unlike too many of his fellow travelers, was smart enough to soundly reject Stalinism! His askance view of capitalism, largely shared by that ol' pinko Burl, is naturally on full view in his debut picture as a director, Force of Evil!

When I thought idly of Force of Evil over the years, I thought of it as a boxing picture, but that’s because of Body and Soul, which Polonsky wrote! John Garfield from We Were Strangers is in both movies, and he stars here as Joe Morse, a slick Wall Street lawyer in the employ of numbers racketeer Tucker, played by Roy Roberts from The Big Trees! Joe’s older brother Leo, who raised him after the death of their parents and who put him through law school, but from whom he is now estranged, is also in the numbers business, but in a benevolent, small-timer sort of a way!

Leo is played by Thomas Gomez from Key Largo, and boy is he good! He can whip himself into a froth just as well as Eugene Pallette can, but you really know he means it! All the actors are good, in fact, including stagestress Beatrice Pearson as Leo’s innocent secretary Doris, who eventually, if briefly, succumbs both to Joe’s corruption and his slab-faced charms! Marie Windsor from ‘Salem’s Lot plays Mrs. Tucker, the vampish gangster’s wife with whom Joe occasionally dallies; Paul Fix from Strange Cargo and Jet Pilot is the even more dangerous mobster Ficco; and Howland Chamberlain from Feudin’, Fussin’ and a-Fightin’ is Leo’s milquetoast slaphead accountant Mr. Bauer, and they must have got him at the same shop they get all the bald, moustached, bespectacled gangland accountants for TV and movies! Ha ha!

Though he discovers his moral bearings near the end of the picture, Joe spends most of it being a croquefort, even if his wish to help his brother is genuine! Ha ha, he does little jerky things like put Doris up on a shelf when she disagrees with him, and big jerky things like coming up with an idea to destroy all the small-time numbers bankers in town so his buddy Tucker can take them over! Apparently, you see, the folks who bet on these numbers always pick the same number, 776, every July 4, and Joe sees to it that 776 indeed comes up this particular Independence Day, meaning the small books will have to pay off big, and thereby get squeezed dry!

Well, Joe tries to warn his brother about it before it happens, and tries to help him after, but his clever scheme ends up costing Leo everything, and himself nearly that! Ha ha, there are no happy endings when going up against the forces of greed and capitalism (but I repeat myself, ha ha), which are after all simply code names for the force of evil referred to in the title!

It‘s a terrific, crackerjack picture! Joe seems like a typical film noir failpuss, but he’s actually quite a complex character, and it’s easy to get wrapped up in his story! Polonsky does a marvelous job with his first stint behind the megaphone, and one wishes he’d been given more chances rather than falling to the ridiculous blacklist! On top of all this, the picture will teach you about the numbers racket, and you’ll finally be able to explain to your friends just what it is! I give Force of Evil three and a half jolly newsboys!