Burl reviews Tales From the Darkside: The Movie! (1990) 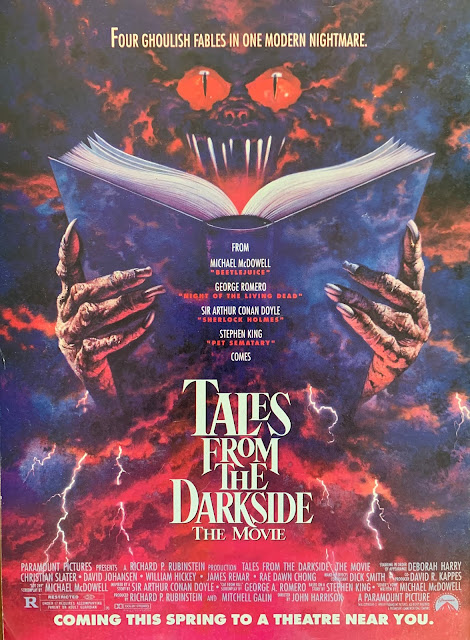 Once upon a time, it’s Burl, here to review a multi-story, omnibus, portmanteau anthology horror picture! Ha ha, of course Dead of Night is the standard bearer for such works, and I’m here to tell you that this movie is no Dead of Night; nor, indeed, is it a Creepshow! No, in actual fact, the picture is Tales From the Darkside: The Movie!

Ha ha, I remember when this one came out in the theatres, but for whatever reason, even though I always like to see horror pictures on the big screen, I ignored it! And I continued to ignore it until recently, when a DVD of the movie came my way and I could ignore it no longer! It begins with a framing story concerning a suburban witch played by Blondie herself, Debbie Harry, well known from Videodrome, is preparing to fricassee a paperboy she has captured, played by Matthew Lawrence from Planes, Trains and Automobiles!

To distract her from her meal prep, the paperboy recounts three tales from a big volume he has found in his cell! The first is the most star-studded of them: laid on a college campus (a setting ol’ Burl always appreciates in horror movies), we meet a gang of students, including Steve Buscemi of Escape From L.A. fame as a nerdbody who has received a mummy by mail order, toffee-nosed rich boy Lee, played by Robert Sedgwick from Morgan Stewart’s Coming Home, who has cheated Buscemi out of a grant or a scholarship or something; the toffeenose’s even more toffee-nosed girlfriend, played by Julianne Moore from The Fugitive; and the girlfriend’s brother, who seems out of place in this tennis whites-wearing crew, essayed by Christian Slater of Hot Tub Time Machine 2! Soon the mean-faced mail order mummy, previously a reposing mummy, becomes a full-on walking mummy, and like his compadres in Dawn of the Mummy, exacts a little gory vengeance to the beat of the cloth-wrapped feet!

Next we meet a rich man, played by the always-welcome William Hickey from Remo Williams: The Adventure Begins, who fears a local housecat and hires a gentleman assassin played by New York Doll David Johansen to take care of the fearsome feline! This one is based on a Stephen King story, but it’s one of his sillier ones, featuring as it does a scene in which the kitty forces its way into someone’s mouth and down his gullet! Ha ha!

The final story is the one that tries to pack in some emotional resonance, and it involves a downtown artist played by James Remar from Quiet Cool, who, despite being poor and unsuccessful, maintains a vast Soho warehouse studio that would tax the income of a Jeff Koons! He has a scary encounter with a gargoyle which wounds him and makes him promise never to tell anyone about it, and then leaves him be! Remar meets a pretty lady played by Rae Dawn Chong from Commando! They fall in love, get married, have kids, and if you can’t guess the twist then you’ve never read an EC Comic or a story by O. Henry!

With the stories told and the basting pan ready, the paperboy of the framing story must figure out a way to escape from the witch, and ha ha, I won’t give that part away! I will give away this fact, however: it’s not a great movie! But it’s not awful either: the cast alone (many of whom had appeared on the Tales From the Darkside TV show) ensures that! It’s slickly made, with some fine makeups and a moment here and a moment there, but it’s decidedly deficient in affrights, and in the end sits about on the level of, say, Creepshow 2! But for my money it doesn’t touch the Amicus pictures from yesteryear (though it does manhandle the later Milton Subotsky productions like The Uncanny and The Monster Club), and while it provides some fun, and the final story tries hard, I can only muster a rating of one and a half wire hangers for Tales From the Darkside: The Movie!