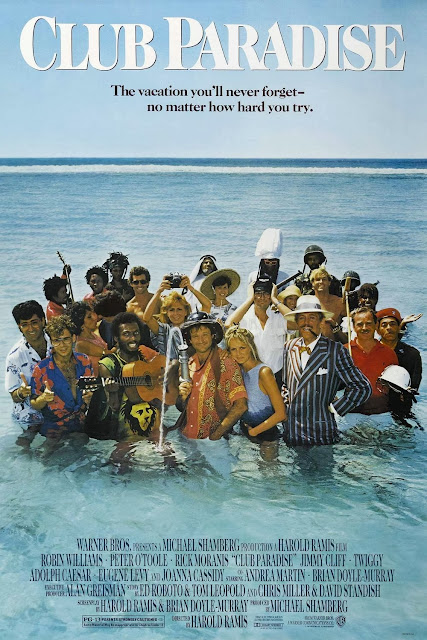 Ha ha mon, it’s Burl! I’ve got yet another review of a marginal 80s comedy picture of just the sort I ignored when it came out, and ever since! Until recently, I’d never seen such a gallery of cracknel biscuits as Protocol, Armed and Dangerous, Funny Farm and The Money Pit, and now I’ve seen them all! Some of them I liked less than others, ha ha, and it’s my terrible duty today to place Club Paradise on the lower rung of these pictures!
It shouldn’t have been that way! Ha ha, it was directed by Harold Ramis, who’d done fine comedy work helming Caddyshack and Vacation; starred Robin Williams, who was capable of being funny; and filled its supporting cast with as many SCTV stars as there are in the sky, with the crucial exception of John “The Silent Partner” Candy!
The plot is some kind of crazy nonsense! Williams is a Chicago fireman who gets exploded out a window and covered in a pile of bricks! With his insurance settlement he retires and relocates to the Caribbean island of St. Nicholas! The progression of events is hurried and vague, but he becomes friends and then partners with Jimmy Cliff, who plays a lite-Reggae singer who also runs a downmarket resort with what is frequently referred to as a very nice beach!
Somehow Twiggy becomes his girlfriend (the whys and wherefores of that are very obscurely presented indeed!), and that great voice of trailers, Adolph Caesar, whose last movie this was, is strutting around like he owns the place! The late, lamented Peter O' Toole plays a cork-pulling consul straight out of a Graham Greene story who strolls through a scene now and again, sometimes in mufti, sometimes not! Suddenly a bunch of wacky tourists descend on the place, and vignettes, one or two of them amusing, are played out like games of tic-tac-toe!
The real keepers here, I think, are Rick Moranis and Eugene Levy, playing a pair of mock-Jewish mashers, both named Barry, with a particularly grotesque line in woopatter! They have many adventures on the island and are separated, and their reunion, after much deserved trial, is actually kind of touching, particularly because of Moranis’s outfit and Levy’s giant bag of marijuana!
It’s all very brightly filmed by Peter Hannan, whose versatility is proven in that he shot both this and its polar opposite, Withnail & I! But take your pleasure where you can with this one, ha ha, because frankly speaking it’s just not very good! The music is surprisingly terrible – ha ha, The Harder They Come this isn’t – and the script is unbelievable lazy, both with the jokes and with the politics! At least its sympathies are in the right place, I suppose, but everything is pretty cartoonish, so “the right place” is pretty unpinpointable! Finally, and most damnably perhaps, is that the picture suffers from a noticeable lack of pep!
Poor Twiggy – this is one of the most undeveloped female roles in modern American cinema, and that’s saying a lot! It’s not much better for Williams though, whose character is frequently something of a jerk! But not a jerk chicken, ha ha! So I’m sorry to say that, while at least the location is far more colourful, the mis- or under-used network stars and the croakball of a script will keep you away from that mellow place you should be in with such a movie! I give Club Paradise one parasailing mishap!
Posted by Burl at 01:17