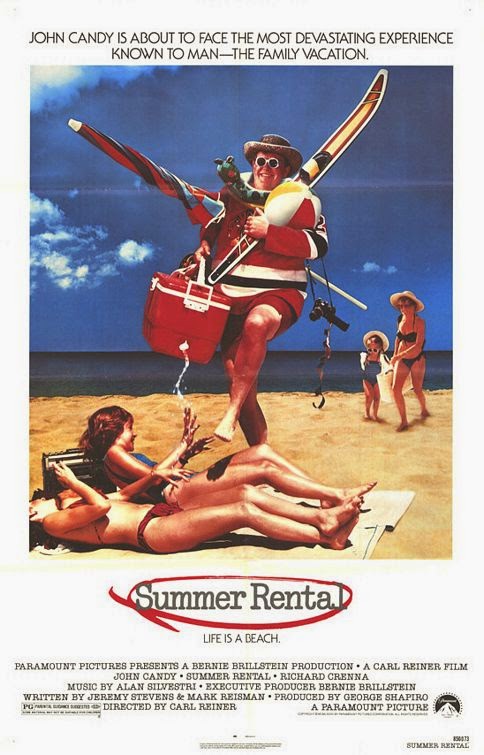 Hi, Burl here with another movie review – a fluffy summer holdover called Summer Rental! This was one of the first starring vehicles for John Candy: he’d spent years as a second banana – albeit a big one – supporting comedy stars like Tom Hanks (in Splash and Volunteers), Richard Pryor (in Brewster’s Millions), Bill Murray (in Stripes) and Elliot Gould (in The Silent Partner)! But thanks to this picture, we could look forward to such Candy-centric pictures as Armed and Dangerous and Uncle Buck!
Candy plays Jack Chester, an air traffic controller showing signs of burnout! He’s ordered to take a vacation, so he loads up the family and it’s next stop: Florida! There they take up residence in a seaside shack, and Candy meets two older men who will become important to what scanty shreds of a plot Summer Rental has to offer! The two men are Richard Crenna, whom we know from such films as Death Ship and The Evil, playing a local big-shot and sailor-man who’s managed to win the regatta every year for nearly a decade; and the other is a pirate restauranteur played by Rip “Extreme Prejudice” Torn, who becomes Candy’s ally and sailing mentor!
Karen Austin, whom we may know from Fish Hawk and Far From Home, plays Candy’s wife here, and does so in the same amiably boilerplate way as Stephanie Faracy would in The Great Outdoors a few years later! Kerri Green, who captured hearts in Lucas and The Goonies, plays his eldest daughter, and there are a couple of other kids as well!
The movie clocks in at a lean 87 minutes, but is very obviously missing entire subplots that someone (the studio, or maybe director Carl “All of Me” Reiner) decided should be given the chop! Ha ha, John “Demon Knight” Larroquette shows up as a solicitous vacationer who helps the family (minus Candy) get into a screening of Top Secret, and is perfectly positioned to serve as a romantic rival to Candy, but then poof! He’s gone! There was other stuff like that too!
Altogether it wrecks the image of the finely-crafted 80s Paramount entertainment machines I described in reviewing Footloose, because the movie is kind of muddled, ha ha! (It reminded me of another 1985 Paramount picture, Blue City, in that way!) There’s not a whole lot of forward momentum, or vim, or pep, or, frankly, laffs! Sure, Candy is funny and appealing, because he always was! Crenna and Torn are good too, but the script, I think, is the culprit here! Ha ha, no jokes! Reiner’s direction is a little bland too! It’s a pretty forgettable little fushtwanger and has all the plot of an actual vacation, so I’ll just give Summer Rental one and a half elderly Chinese pirates!
Posted by Burl at 22:44