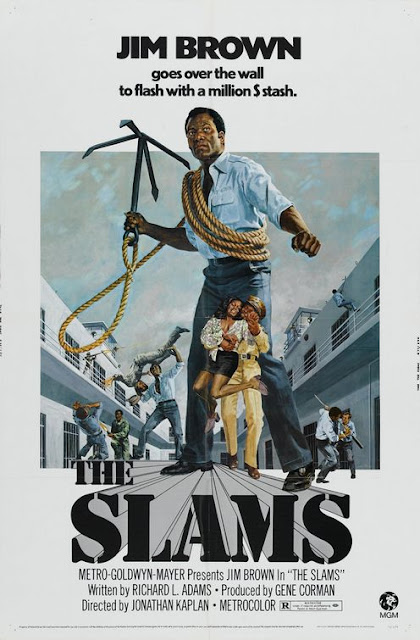 Ha ha, and clang goes the cell door, it’s Burl! Yes, I have a review of a pokey picture for you today, directed by our old pal Jonathan “White Line Fever” Kaplan! Yes, the movie is called The Slams, and, ha ha, it’s a tough little quillici of a Gene Corman production, with none other than football great Jim “Small Soldiers” Brown in top form as the lead jailbird, Curtis Hook!
The opening of the movie is a bit queasy! Hook and his associates, arrive at a gathering of mind-drug mobsters! They will have precious few seconds to regret their choice of a shipping container as a meeting place when they are locked in and fed cyanide-laced exhaust in place of air! Ha ha! The successful heist is quickly followed by a fatal falling-out between Hook and the others, and a wounded Hook ends up tossing away the smack and hiding the million-and-a-half in ill-gotten gains!
Well, he’s soon checked into the crossbar hotel, an object of interest to all! Brutal goon Ted Cassidy, who of course fought Steve Austin in the terrifying Bigfoot episode of The Six Million Dollar Man, wants to do horrible things involving caustic liquids to him! The high-living capo, played by Frank De Kova of course, wants the money on behalf of the mob! And the round-faced Captain of the Guards, who I thought the whole time was being played by David from Sesame, silly Burl ha ha, also would like the money, and is willing to employ some pretty underhanded methods too!
On the outside, Hook’s ladyfriend, at her man’s direction, gets in touch with a shady character who owes Hook a favor, or is his bosom chum, or some admixture of the two! (Hook’s lovely lady is played by Judy Pace from Frogs, and the buddy is Paul Harris from Kaplan’s later Truck Turner!) An escape plan is cooked up, and many punchings are laid upon one and all!
Critical to the plan is a cab ride with driver Dick Miller, that great actor whom we know from Lies, Gremlins 2, Get Crazy, Moving Violation and all sorts of other movies! Ha ha, as good as most of the other actors are, the movie really felt as though it upped its game during those Miller moments! You forget what a good actor he is unless you really pay attention, ha ha!
I’ll tell you that a cement truck provides a grisly surprise in the penultimate moments of the picture! The very last scene shows Hook and his lady enjoying the spoils of their booty, ha ha, although one thinks with regret of his old mum, whom he appears to have left behind with her believing him dead! Poor goodhearted old lady!
The pokey picture isn’t my favourite genre, I must admit, but this is a pretty entertaining one! It’s fairly nasty and brutal too, but not very realistic! The escape scene is easy enough to buy into, though some of the specifics of the outhouse hiding spot were a little mystifying to me! Ha ha! I’m going to give The Slams two and a half ladles of bleach, with almost a full one of those for the Dick Miller scene alone!
Posted by Burl at 23:59