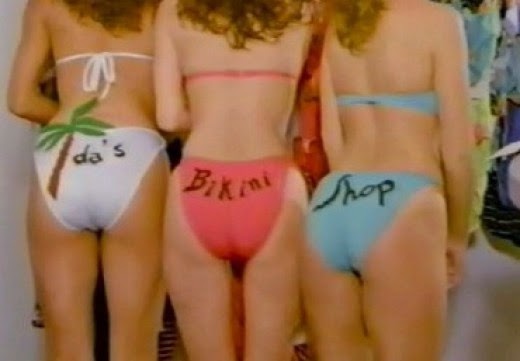 Ha ha, bikinis! Yes, it’s Burl here, reviewing up a little bikini action for you with a carefree funtime picture called The Malibu Bikini Shop! Ha ha, this is a real balletomaniac of a picture, straight-up manna for people who enjoy looking at ladies in bikinis! It’s not an especial passion of mine, but I also certainly don’t mind it, and so when I put on The Malibu Bikini Shop the other night, I was ready for whatever it had to offer!
But we should start with that title, because it’s pretty obvious the movie takes place in Santa Monica or Venice, and certainly not in Malibu! Ha ha, I guess someone thought The Bikini Shop was a pretty bland title – and it is – but then couldn’t think of anything better than to stick “Malibu” in there! Or maybe Malibu was the hip, happenin’ place to be in 1986, and the very mention of it assured box-office success; or maybe someone was a big fan of that great picture Malibu Beach! Ha ha, who knows!
Whatever the case, this partcular lighthearted laff-fest begins with a fatal drowning accident! Yes, frisky Aunt Ida putters off on a jet ski into riptide territory, and that’s the last anyone sees of her! She wills her house and her beachfront bikini shop to her two nephews, Alan and Todd! Alan, played by Michael David Wright from No Small Affair, plays a button-down, uptight business major, who has just collected his degree and is preparing for a life with his shrill, princess fiancée Jane, and a job with his plutocrat father-in-law-to-be! Ha ha, seems pretty horrible! (Wright, by the way, became a real-life executive later on, so maybe his performance was not so fictional!)
Todd on the other hand is played by Bruce Greenwood from Star Trek Into Darkness, and he’s a slap-happy beach bum with no business acumen or respect for traditional values! He’s quite happy to spend the rest of his life running the bikini shop and creepily watching ladies change through two-way mirrors he’s had installed; while Alan, at the behest of Jane, wants to be rid of it with a quick sale and then move on with the rest of his boring, ordered life! Ha ha, therein lies the central conflict in this picture!
But the plot hardly matters, because the true foundation of this picture is bikinis! Ha ha, it’s bikinis all the way down! There are all sorts of scenes of ladies trying on skimpy bikinis, or displaying them in ad-hoc shows! And there’s a crazy little music video that pops up toward the end of the picture, and of course, ha ha, it’s bikini-centric!
But the plot occasionally reasserts itself, as when Jane suddenly appears in the middle of all the bikini action and makes a dreadful, whining nuisance of herself! I have to give credit to Debra Blee, well-known from The Beach Girls, who throws herself into the thankless role of Jane and becomes exactly what I imagine she’s supposed to be: intensely annoying, almost unwatchable!
Of course there are some big party scenes and other shenanigans, and the picture positively overflows with bikini shots! It has a mostly harmless funtime atmosphere, except for some of the less-savory aspects, and nothing about it is surprising or challenging in any way, or very funny either! It’s brightly shot and has a reasonable amount of pep, and with all this studiously taken into consideration, I’m going to give The Malibu Bikini Shop two dashiki-wearing Sonny Bono lookalikes!
Posted by Burl at 14:03