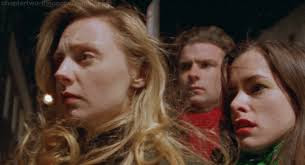 Hi everyone, and welcome back to the 1990s! Ha ha, it’s Burl here, reviewing an indie picture from that decade that I missed the first time around, but have now finally caught up with! This movie, The Daytrippers, is one of those drama pictures that’s completely of its decade, but nevertheless seems a little timeless! You know, interesting thing, I made one of these movies myself way back then, though I’ll be the first to admit it didn’t turn out as well as this one!
The Daytrippers was the first feature film from Greg Mottola, whose later work would include things like Adventureland and Paul! It has not so much a story as it has a hook: Eliza, a Long Island wife in a marriage she had previously assumed harmonious and loving, one morning discovers a romantic note written to her husband Louis (she presumes), from someone named Sandy! She takes the note to her parents’ house, where her sister Jo and Jo’s boyfriend Carl are visiting! The five of them pile into a woody wagon straight out of Vacation and truck into the city to confront Louis and find out just what in biscuits is going on!
Ha ha, that’s pretty much it for the story: the movie really is about character and incident! The character angle is well served; for an extremely low-budget picture shot on a tight schedule, there are some very solid actors involved! Hope Davis plays the apparently wronged wife, and she’s very good and very pretty in the bargain! Parker Posey from Dazed and Confused and A Mighty Wind is Jo, a flibbertigibbet-in-training; Liev Schreiber, well known from Scream and Phantoms, is the pretentious and constantly micturating would-be novelist Carl, who’s still kind of likeable for a’ that! The parents are played by Pat McNamara from Blue Thunder and Anne Meara from Reality Bites; both are good, but Meara does a particularly good job at creating a realistically monstrous mother, a tough job when that sort of character has become so stock! Stanley Tucci from Monkey Shines plays the mysteriously-behaving Louis! We get cameos from the likes of Campbell Scott from Top of the Food Chain and Marcia Gay Harden from Miller’s Crossing, although these don’t amount to a whole lot, fine as these actors are!
The movie contains a twist that is somehow very 1990s, and hasn’t aged particularly well! But the real conclusion, after all the yelling and consternation, is in fact nicely inconclusive, and while I’ve read complaints about it, it served the picture well so far as I was concerned!
It’s a solid indie, if hardly world-changing (though I guess it changed Mottola’s world, ha ha!), with good acting, an occasionally funny script, and a nice sense of time and place! It’s no visual or cinematic marvel though, that much is certain! But it’s a strong effort that will give you and your viewing partner something to talk about after! I give The Daytrippers two and a half sloppily-made gin and tonics!