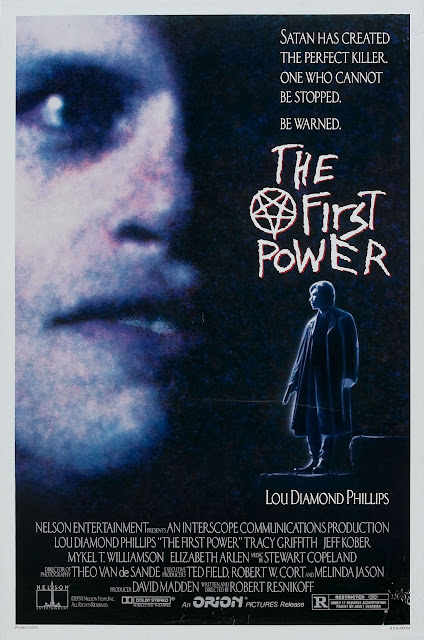 Well hello again friends, it’s Burl here! I’d like to review a picture I saw way back when it was released into theatres in 1990! Ha ha, back then I would just go and see anything that looked interesting, and especially any horror movies! I’ve always loved seeing horror pictures in the cinema whenever possible, and that policy has usually served me well!
Today’s picture, The First Power, was one that seriously tested my resolve, however! For a while I thought “Ha ha, Burl, maybe this policy of going to see any horror picture in the theatre is not so wise after all!” But after some thought I realized that The First Power is not really so much of a horror picture anyway – it’s more of a cop action drama! And re-watching the picture again the other day only confirmed this opinion!
It seems there’s a satanic slasher killer at large in Los Angeles, and only noted serial killer expert cop and Bats fighter Lou Diamond Phillips – with help from a mysterious psychic – can catch the jagger-lipped fellow! The psychic warns him not to send the killer to death row, but that’s straight where he goes, and it’s after his execution that things are meant to become interesting!
The psychic is a pretty lady, of course, played by Tracy Griffith from Fear City, but Lou is dedicated to his philosophy of logical positivism, and he doesn’t buy into any mumbo jumbo or hocus pocus! So when the killings continue it takes a while for him to believe that old liver lips is back! But after witnessing the killer make several spectacular leaps – this picture is absolutely lousy with spectacular leaps, ha ha! – he changes his tune, accepts the possibility of pocus at the very least, and from there it’s a race to figure out just how to kill the body-hopping fellow once and for all!
It’s a silly picture, very mechanically done! It’s never once scary, though there are points where you feel the panic of the characters as they realize this satanic boogeyman is going to find them wherever they go! But like I said, it’s mostly about spectacular leaps and other such stunts! There’s one stunt scene involving rushing water that was apparently a record-breaker at the time, but it’s shot so drearily that the excitement is never there! Ditto the building-jumping scene!
This was one of a bunch of similar pictures that came out around the same time: Exorcist III, Shocker, Mister Frost, and probably more! (Two out of those three I saw in the theater, ha ha!) All of them feature chuckling, whispery, know-it-all serial killers who don’t fear incarceration or execution because they’ve made contingency plans! I’d say this was the worst of the genre, and almost as forgettable as the might-as-well-be-a-remake that came out eight years later, Fallen, which featured Denzel Washington in the Lou Diamond role!
It was nice to see David “Re-Animator” Gale in a brief appearance as The Monsignor, but otherwise the acting is slack and poor! What’s mainly lacking is pep, ha ha! This movie’s get-up-and-go clearly got up and went, and so I give The First Power only one Jesus knife!
Posted by Burl at 22:55