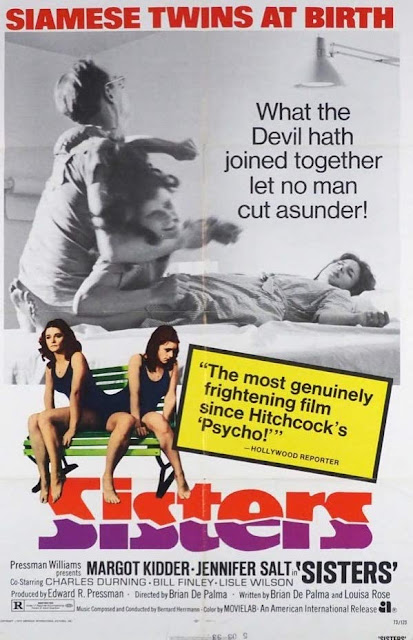 Ha ha to all you ladies and gents, it’s Burl reviewing your way! Today I’m going full De Palma, reviewing one of his earlier and more eccentric pictures, Sisters! I’ve enjoyed this fine old numbula several times before, and recently I enjoyed it again! It’s not fully developed, mature De Palma, and even De Palma fans like myself must admit that’s both a positive and a negative, ha ha!
Nevertheless the picture establishes much of what we still today love about the man’s filmmaking! Yes, it’s got that unmistakable Hitchcock buttprint, but while De Palma has been given grief about this obvious influence for practically his whole career, I myself have never seen a problem with it! As in Rear Window, the acts of looking, of seeing, of spying, are of paramount concern here; equally too the idea that the looker is as likely as not to misinterpret what they’re seeing!
The picture starts with a goofy game show, Peeping Toms, in which contestants are put into situations in which they must balance moral concerns with prurient ones! (Ha ha, one wonders how many times such a concept could be repeated, and, really, how it could even fill out a single half-hour episode!) Margot Kidder from Black Christmas plays Danielle Bréton, a Québécoise model whose job on the show is to pretend to be blind and to begin undressing in a half-built locker room while a lingering man, the game’s real contestant, decides whether to keep watching through the open wall or not! Ha ha, the male contestant is played in a likeable performance by Lisle Wilson, who was also in The Incredible Melting Man!
After the show, and dinner at The African Room, the two return to Danielle’s Staten Island apartment! Here, things become complicated when some disappearing pills, a gaudy birthday cake, some game show cutlery and a mysterious, savage Siamese twin all come together to spell murder! The bloody carnage is witnessed by investigative newshound Jennifer Salt, from It’s My Turn, who has an apartment across the way!
Ha ha, of course the coppers don’t believe our newly-minted heroine because she writes exposés about police misadventure for the Staten Island Shining Light, so she turns first to aged newshound Barnard Hughes, the heroic Von Grampa in The Lost Boys, and then to private eye Charles Durning, whom we love so well from Stick and The Hudsucker Proxy! Together they discover things about the creepy Franco-Canadian doctor played by De Palma regular William Finley, whom we may recall from The Fury and Silent Rage; and they learn something interesting about a couch; and the personal dangers of hypnosis are revealed! Ha ha, I won’t go into great detail about the rest of the story, as this is the sort of movie whose pleasures derive from the unpredictability of its plot!
Of course there’s one development that might not come as a surprise, to some anyway! But there’s more than enough weirdness along the way to make up for that, ha ha, and the last shot in the picture, involving Durning and a telephone pole, wraps things up with very un-Hitchcock ambiguity! It can’t be said that everything in the picture works; there’s something a little cluttered and unfinished about the storytelling, and the tricky-tricks De Palma employs, like the split screen stuff, don’t seem as well thought out as they do in some of his other pictures, for instance Phantom of the Paradise, Dressed to Kill or Blow Out!
Bernard Herrman’s score is mostly good, though a few of the stings he employs sound like something from a Herschell Gordon Lewis picture! Ha ha! And just about all the performances are strong, each bringing precisely what’s needed to the story! Even Margot Kidder’s Quebecois accent is acceptable! It’s a stepping stone picture, no question, but a good one, and I give Sisters three couchstains!