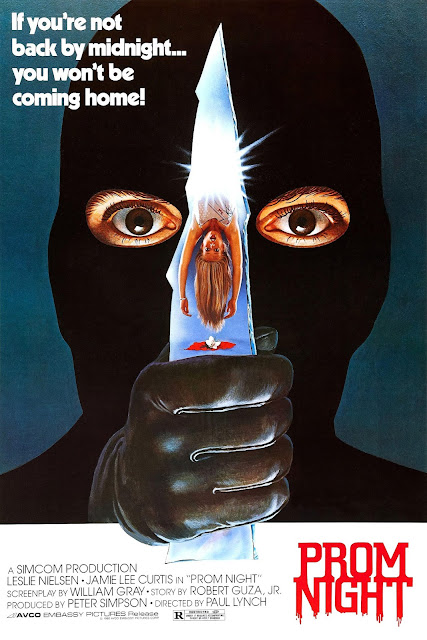 Hi, Burl here to let you know that it’s prom night; perforce, everything must be all right! Ha ha yes, that’s right, I’m quoting the sadly misinformed and inaccurate disco theme song to the early Canadian slasher film Prom Night, a night in which, for a number of characters in the movie, everything is decidedly not all right!
This is a semi-classic slasher movie whose semi-classic status stems entirely from its vintage and from the fact that it spawned three or four sequels, with which all it has in common are proms and nights! Certainly it does not arise from great style, technique, pep, or other signposts of cinematic quality! And yet it has a certain something, that indefinable, ineffable thing which I will try to parse out for you in this review!
We start with the prologue, a half-dozen years before the main action, in which a little girl finds herself chased out a second-story window by some slightly older kids playing a game called The Killer Is Coming! Six years later we meet the Hammond family: no organ players they, but a school principal played by Leslie Nielsen, whom we know from Project: Kill and Creepshow; an older daughter named Kim, essayed by the one and only Jamie Lee Curtis of Halloween and The Fog fame; a wrung-out looking mother played by Antoinette Bower from Time Walker and Club Paradise; and a brother, Alex, played by actor-turned-location manager-turned realtor Michael Tough! Of course the little girl who fell that day was the family’s youngest child, and they all miss her terribly!
At Hamilton High prom night is approaching, and Kim is the queen, and Wendy, a perfect recreation of the P.J. Soles character from Carrie, here played by Eddie Benton from Halloween II and The Boogens, is seething with jealousy in the margins because her former boyfriend Nick is the king, and it looks like Kim and Nick have started a royal romance! Wendy hooks up with a missing-link greaser called Lou, and meanwhile a couple of Kim’s friends are hoping this special night to shake the dew off their petals, ha ha!
Nick, Wendy and the two virginal girls were the bullies who sent young Robin out the window, and the innocent fun of the evening is spoiled when a balaclava-clad killer starts in with the pokings and the slashings! It all takes a while to come about, though, and meanwhile we spend quality time with Mr. Sykes, the drooling, hair-netted janitor whose presence at the school goes unappreciated by the teens! Ha ha, they just moon him, or Vicki does anyway! 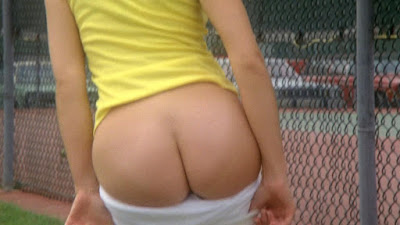 But he’s the reddest of herrings, as is the local deformed killer whom everyone assumes will be responsible for any murderous rampages that might occur that evening! And one does, of course, amid endless scenes of disco hand dancing and a fair old bit of necking! The peppiest it all gets are one scene involving a boogie van going off a cliff with the unfortunate nerd Slick still at the driver’s seat, and another wherein the troublemaking monobrow Lou is decapitated with an axe and his head rolls down the catwalk to make everybody scream! In the end there’s a surprise culprit, and part of the surprise is the unexpected use of lipstick in the scene!
It’s a slow picture, a little like Halloween but without the style or the scares! It’s got its own style, however, mostly in the form of slightly cheesy but still effective goofshots courtesy of director Paul Lynch, who also brought us Bullies! And it’s got aspects I really like! Character things, like Wendy’s mysterious relationship with the little old lady who lives with her, or Slick’s simultaneous double life as a portly nerd and a boogie van-driving stoner! There aren’t much in the way of Special Makeup Effects on view, aside from one severed head and a bit of neck jelly on a slashed throat, so that’s a bit of a shame! (There’s a credit for “Prosthetics” in the end crawl, but I didn’t see any!) For all its faults I quite enjoyed my recent VHS viewing of this picture, and so I give Prom Night two savage moonings!