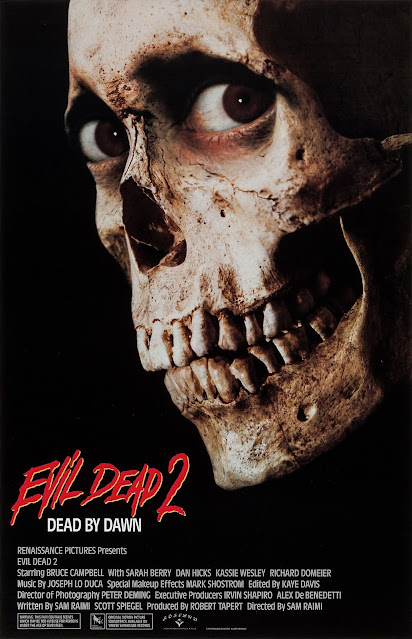 Hi, groovy friends, and happy June - it’s Burl! Yes, I’m here to review an old favourite, a movie as comfy and familiar as an old worn hoodie! It’s Evil Dead II, and for me it was a story of triumph, because in my neck of the woods, an R rating meant no one under 18 allowed in, whether with a parent or not! The trade-off was that movies were not often rated R, but when Evil Dead II showed up in my town, it did carry that restrictive rating! It played a huge, venerable old downtown moviehouse, just about the best venue possible, and so on opening night I showed up, aged maybe sixteen but determined not to be stopped! By sheer persuasive force of will, I and my friends all got in, employing the same deep, commanding growl as the teen wolf in Teen Wolf (which, by the way, I was once forced to see instead of Return of the Living Dead because I did not yet know the trick Teen Wolf was about to teach me), and entered the cinema to find a big crowd just as pumped as we were to see it!

I’ve gone and immersed myself in nostalgia now, and I’m rambling; but the point is that seeing Evil Dead II on a huge screen on opening night with a large responsive crowd can be, and was, a formative experience for a young man! And I’ll admit this without hesitation: my review of it will probably not entirely be able to escape that cherished memory!

Of course it’s one of those half-remakes, half-sequels, as was the case with Phantasm II: intended equally to please fans of the original Evil Dead as well as people who’ve barely heard of it! Those of us who’d seen the first one knew the story of Ash and his friends and their holiday weekend at the old cabin in the woods, and the Book of the Dead and its demon-bothering passages! At the beginning of the new one Ash arrives at the cabin again, this time with just his girlfriend, and some audiences were confused as to how he could be stupid enough to return to the same cabin and play the same tape recording all over again! Ha ha!

But of course even Ash isn’t that dumb - it’s just a retelling of a similar story with the same character! Ash awakens the demons by playing the old professor’s tape recordings, his girlfriend is possessed, then he is, and he flies through the forest and bangs into trees, and later there’s a remarkable comedio-horror scene involving his hand! New characters arrive, a hideous bloblike basement dweller plagues them all, and many Three Stooges gags are cleverly retooled in shock-horror settings! Ash’s hand causes many problems, as does an overalls-clad hillbilly; but eventually a vortex is opened in the fabric of time-space and by the end of the movie we are left with the setup for the third film in the series, Army of Darkness!

You’ll notice I haven’t said much about the plot, and that’s because everyone knows the plot, and anyway there is no plot! Ha ha! It’s all about the gags and the trick effects (which are plentiful and impressive) and Sam Raimi’s living camera, which prowls around and spins and pushes in aggressively at just the right moments, and the performance of Bruce Campbell as the punishment-absorbing Ash! Ha ha, you can tell that Campbell himself absorbed no small amount of punishment in the shooting of this picture, and that just makes the whole thing that much more enjoyable! Sorry, Bruce! Hopefully he had it easier in later pictures like Maniac Cop, The Hudsucker Proxy, Escape From L.A., and Congo!

I find it all highly entertaining, and I think I always will! Evil Dead II may come off to some as just an exercise in trick effects and camera style and silly gaggery, and I can’t call that position unreasonable, but to me that’s a formula for success, at least in this specific case! Ha ha, I’m as fond as can be of Evil Dead II and I give it three and a half work sheds!