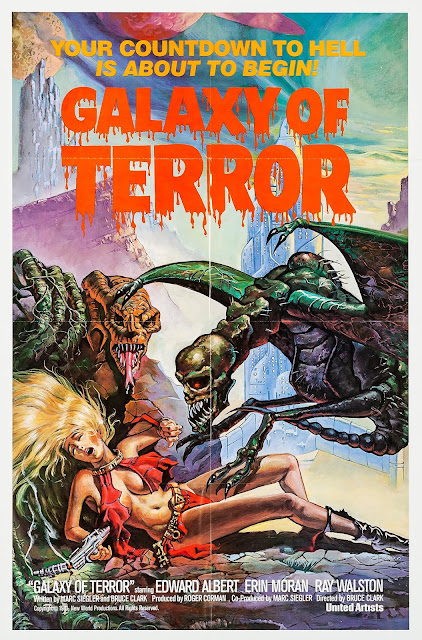 By grimbus and by garr it’s Burl, here with a review of one of Roger Corman’s early-80s sci-fi/horror hybrids! You all know about such gems as Forbidden World and Humanoids From the Deep, and you may even know about Space Raiders, but the picture I’m reviewing for you today, Galaxy of Terror, is in many ways the most special of them all!

Ha ha, when this one came out I tried to go see it with my friend Dave! We were both little kids, but we loved horror movies; and, as Galaxy of Terror was showing in a multiplex and was rated R of course, we bought tickets for a Rocky Horror Picture Show revival then tried to sneak across the hall into the cinema where the movie we really wanted to see was playing! But halfway through the opening credits we felt strong hands clamp on our shoulders, and two burly ushers hoisted us up, marched us to the door, and tossed us out into the street to roll in the gutter! It's too bad, because what a victory it would have been to see this beauty on the big screen!

It’s a Alien knock-off, of course, but only to a point! We open in the office of The Master, a fellow with a glowing red head and the voice of that fine gent Ray Walston, famous for his roles in Silver Streak and Johnny Dangerously! He’s talking to an old space witch played by Mary Ellen O’Neill from Van Nuys Blvd., and he decides the thing to do is to round up a spaceship crew and head to Morganthus, a mystery planet where a previous spaceship crew has disappeared! Thanks to the enthusiasm of spaceship captain Grace Zabriskie, whom we recall from Drop Zone and many fine David Lynch pictures, the characters find themselves on the nightmare planet in no time flat!

Our hero is an upright fellow named Cabren, played by Edward Albert from When Time Ran Out and Getting Even! Ha ha, everybody has lame space-names, like Baelon, the mildly antagonistic character played by erotic film director Zalman King, or empathy-lady Aluma, played by Joanie herself, Erin Moran! Bernard Behrens from The Changeling and The Man With Two Brains is an old man along for the ride; Taafe O’Connor from Hot Chili is the buxom lady with a fear of worms; Robert Englund, Freddy himself from A Nightmare on Elm Street 3: Dream Warriors, is a little guy called Ranger; and Sid Haig, whom you surely remember as the Righteous Brothers’ drummer in Beach Ball, is the virtually mute Quuhod! Ha ha, Quuhod! And Ray Walston is along as the cook, who by an amazing coincidence has the same voice as The Master!

It turns out the planet, and in particular a big pyramid located there, is a place that makes manifest the worst fears of anyone who enters! The first to go is a whinyman played by Jack Blessing from Summer School, who gets eaten by a big doodlebug and we’re glad to be rid of him! The old commander guy goes down a wormhole and is sucked dry by vermiforms; Sid Haig has his beloved crystals turn on him and his own severed arm delivers the death-stab; Zabriskie’s Captain Trantor is incinerated; and poor Erin Moran ends up getting crushed by cable snakes in a crawlhole! Ha ha, yikes! But the worst and the goofiest of all is of course the famous maggot assault, which makes neither psychological nor physiological sense but was intended only as an over-the-top outrage designed by Corman to attract daring or depraved viewers! 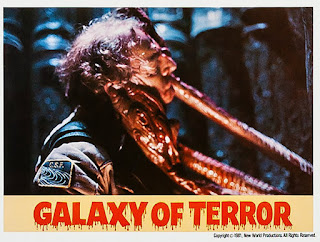 There’s some good squoochy gore in here, and mixing this together with ambitious low-budget special effects, James Cameron’s tenpenny production design (and his shock-dancing maggots, ha ha), that stellar oddball cast, and some gloriously dumb metaphysics, we get a heady brew indeed! The movie cares not a fig about making sense, but it does deliver a parade of trick effects you will surely enjoy! I don’t care for the maggot rape, nor for the sensibility that concocted it, but it’s outlandish enough to be more or less ignored, and I’m only glad the actress escaped being crushed by the giant worm prop! Galaxy of Terror is not a movie for everyone, but it’s got a strange hold over me, so with some reservations I award it three redheads!