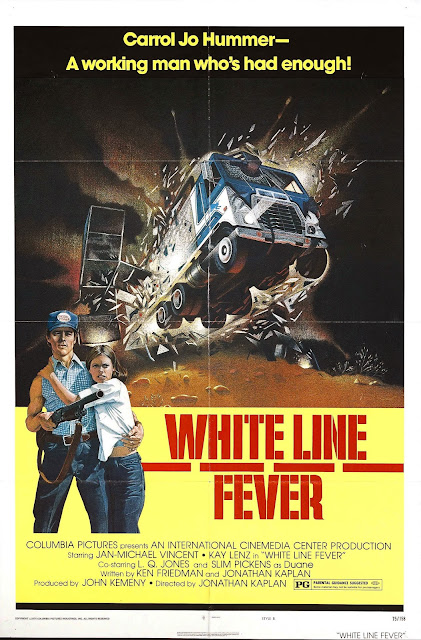 Hi, Burl here, putting the hammer down and roaring back to life! Ha ha, Carrol Jo Hummer! Yes, good buddies, that’s the name of the main character in White Line Fever, and I like it so much, and it gets repeated so much in the movie, that I just have to say ha ha and repeat once more, Carrol Jo Hummer! Of course Carrol Jo Hummer is played by good old Jan Michael Vincent, whom we know well from pictures like Enemy Territory and Shadow of the Hawk!
Well, White Line Fever is not so much a trucking movie as it is a trucker’s movie! The distinction is important! Most trucker pictures are workingman films, or purport to be, but this one actually walks the walk that it talks! It’s about as pro-union a picture as you’ll find outside of Matewan, and that’s a fine thing as far as old Burl is concerned! You see, Carrol Jo Hummer (ha ha!) is an independent trucker, and he’s trying to get out from under the heavy thumb of the corrupt and greedy company that wants to control all the trucking in the state of Arizona!
Kay Lenz, from Moving Violation, plays Carrol Jo’s long-suffering wife, and here I really mean suffering! Ha ha, she really gets the short end of the stick here, and no mistake! But she sticks by Carrol Jo, at least until she’s beaten so badly that she becomes insensate and unable to either stick by or not stick by any man in particular!
The movie features some excellent character actors, like R. G. Armstrong, the kindly doctor in The Beast Within, and L. Q. Jones, who was the sheriff in that very same picture! Ha ha, old L.Q. sure plays a good bad guy! Sam Laws from Get Crazy is here, as is the excellent Slim “The Howling” Pickens! But of course the finest actor we find in this movie, which is saying a lot, is the great Dick Miller, from The Long Ride Home and so many other pictures, who here plays a friendly, good-hearted, squirrel hunting jacket-wearing trucker named Birdie!
The picture has a strange, only-in-the-70s ending, wherein the bad guys are not really vanquished in any substantive way; though Carrol Jo performs a symbolic gesture which puts him in the hospital, but wins him the acclaim of an Arizona crowd, including Dick Miller, who’s sitting on a wall wearing his best squirrel-hunting jacket! Ha ha! But aside from L.Q. Jones, who catches a punching, the bad guys responsible for all the pain and suffering undergone by Mr. and Mrs. Carrol Jo remain unpunished!
But that makes it a more interesting movie by many leagues! Ha ha, with its unusual approach to trucker cinema, its pro-union bona fides and its cast of marvelous faces, White Line Fever is an enjoyable little exercise in long-haul filmmaking! Ha ha, sure, it’s a bit dumb here and there, but I’m going to give White Line Fever two and a half Glass Houses!
Posted by Burl at 22:28