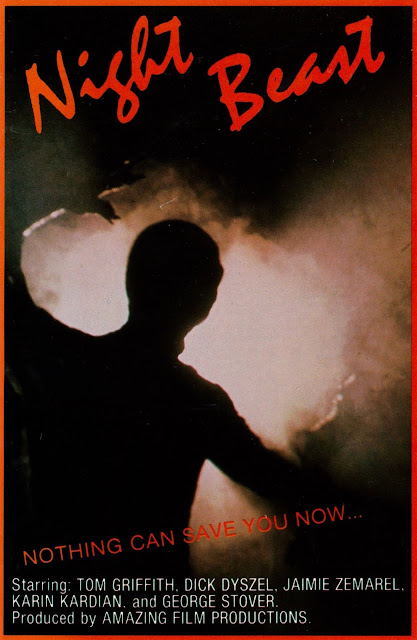 Dateline: Baltimore! Yes, it’s Burl, returning to the wooded suburbs of that Eastern metropolis to review a work by its most famous filmmaker! Now some might say the filmmaker I allude to must be John Waters, while other, more mainstream cineastes may insist upon Barry Levinson! However, the hep among us know that I can only be referring to Don Dohler, who brought us the magic of Fiend, and then, by some unknowable wizardry, filigreed together a space monster epic called Night Beast!

Ha ha, I’ve long enjoyed this little picture, I must say, so I may not be the most objective of critics! I can still recall an all-night festival of VHS viewing held in my basement when I was about 14, in which I and a few friends watched this picture along with Taxi Driver (which we were all seeing for the first time), The Demon Lover, and one other fine film, its title lost to the mists of time! Night Beast is no Taxi Driver, but rather the simple tale of an alien with a prolapsed face and a silver jumpsuit who crash lands on Earth and starts killing the local people with either his ray gun or his fearsome teeth and claws!

The local sheriff, a Bob Ross-looking fellow called Jack Cinder, along with his contextually comely deputy Lisa and a pair of scientists, do their best to pursue and destroy the invader! Ha ha, the head scientist is played by Maryland’s version of Bea Arthur, and her assistant, Steven, is none other than the King of Baltimore himself, George Stover! Ha ha! Of course, we know George from his appearances in Female Trouble and Jan-Gel: The Beast of the East; and another familiar face from the Dohler stock company is the beastly Don Leifert, who played Mr. Longfellow in Fiend and here is a monstrous motorbiker called Drago! One eagerly anticipates Drago’s demise at the paws of the lamprey-faced alien, but he tastes the cruel blast of buckshot instead!

Also entertaining are the corrupt mayor and his addle-pated blonde ladyfriend! Ha ha, they both come to sticky ends (very sticky, considering the maraschino juice they used for blood, ha ha) when the alien busts into their house and makes mincemeat of them! Many of these characters have the same names and are played by the same actors as in an earlier Dohler picture called The Alien Factor, but all of them treat this new alien invasion as though it’s the first one they’ve ever experienced, so maybe they’re not supposed to be the same characters after all! Ha ha, such are the vicissitudes of the Dohlerverse!

Here’s an interesting thing! The synth score of Night Beast was in part composed by J.J. Abrams, director of Super 8, and one assumes his work on this picture informed his own later stab at the invading-alien genre, ha ha, and the amateur moviemakers of the picture may well have been inspired by Dohler and his gang! The ugly night beast himself was designed by a fellow named John Dods, who did up the trick effects in The Deadly Spawn, and that really underlines the connection I think the two pictures have!

In the end the characters crib an electricity-based trick from The Thing From Another World to get rid of their unwanted visitor, but not before he’s raygunned dozens of people, including the director’s children, and savaged many others! There’s plenty of great goopy gore on display, and lots of cheap optical effects, and while the alien zapping scenes get a little repetitive, the picture is never boring! It’s eighty rural minutes of rubes-vs.-monster action, with a little bohankie and a lot of tomato paste thrown in, and how can you go wrong with that! It is, in its modest way, an exemplar of low-budget 80s genre filmmaking, and the poor script, indifferent direction and variable acting are all a part of that! Perhaps it could use a little more Evil Dead-style pep, and maybe it’s not the most original screen narrative ever produced, but gosh darn it the thing has heart, and I like it! I give Night Beast two and a half salt-and-pepper afros!