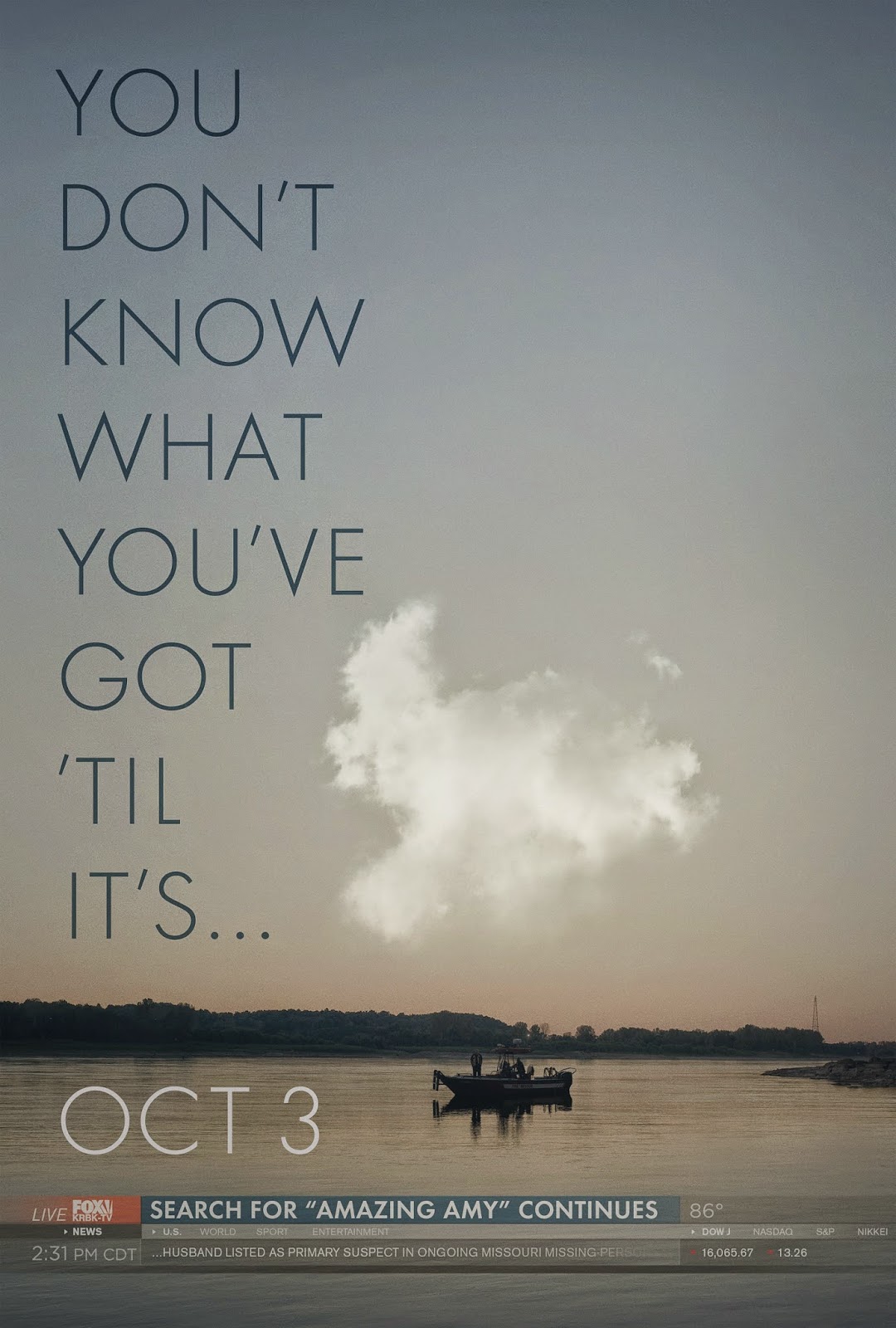 Ha ha, Burl here with a review of one of the newer movies! It’s something from last year, so it’s not that new; but I ought to admit that I actually watched it last year – recently, but still last year, in the second-run movie house! The picture is Gone Girl, and it’s a movie I purposely refrained from reading much about before seeing it, because I figured it would be more pleasurable letting the plot just happen!
I think I was right, and for that reason, reader, tread carefully if you plan to see the picture but haven’t yet! I’ll do what I can to preserve your innocence, ha ha! It’s not that the movie has plot twists – nothing that happened was all that surprising – but sometimes it’s nice to let the movie just do its thing in its own time!
I will say that this is essentially a flatland reworking of some troubled-lady neo-noir like Body Heat or Basic Instinct! Ha ha, the man-patsy character is present and accounted for in the form of Ben “Dazed and Confused” Affleck as Nick! The lady of confusion is Amy, played by Rosamund “Jack Reacher” Pike, and one day Nick comes home to find her disappeared from the house under suspicious circumstances!
Well, pretty quickly he becomes the object of police suspicion, and indeed there are some circumstantial factors which would cause anyone to look askance at this bum-chinned suburbanite, not least that he’s Amy’s husband! How on point this factor is becomes clearer as the movie goes on! But in the meantime there’s a sense of our hero being drawn into a whirlpool of forces smarter and more determined than himself! Ha ha!
All sorts of things happen, and the movie proves to be less about marriage and interpersonal relationships, its nominal theme, and more about the role public opinion plays in determining the path of justice, and the role tabloid culture in turn plays in forming public opinion! Its ultimate thesis is ‘Ha ha, people are idiots,’ which makes a certain amount of sense when you think about it!
There’s room in the picture for one blood-soaked scene of gruesomeness, and there are also some scenes of minor suspense, but a lot of it is just Nick putting the pieces together while the cops, street neighbours and Amy’s rather dislikable parents all give him the hairy eyeball! (Amy’s dad is played by David Clennon from The Thing, though here his head doesn’t split open like a flower and try to gobble up the other characters, ha ha!)
The picture is engaging while it’s on, but is ultimately just a trashy melodrama in evening dress! If you give a thought to the plot behind the plot, right down to the money belt buckled so carelessly it can be dislodged by a round of mini golf, it all falls to flinders! On the other hand it looks nice, features fine performances throughout and has a weirdly Windham Hill-flavoured musical score that I liked but didn't like! It’s altogether a slick bit of pro moviemaking, and for an afternoon at the second-run picture palace, it did the trick! (But if Inherent Vice had been playing somewhere near me at the time, I’d have gone to see that instead!) All told, I figure on giving Gone Girl two robot dogs! Ha ha, woof woof!
Posted by Burl at 14:31

Email ThisBlogThis!Share to TwitterShare to FacebookShare to Pinterest
Labels: 21st century, drama, mystery, saw it on a date, saw it on the big screen