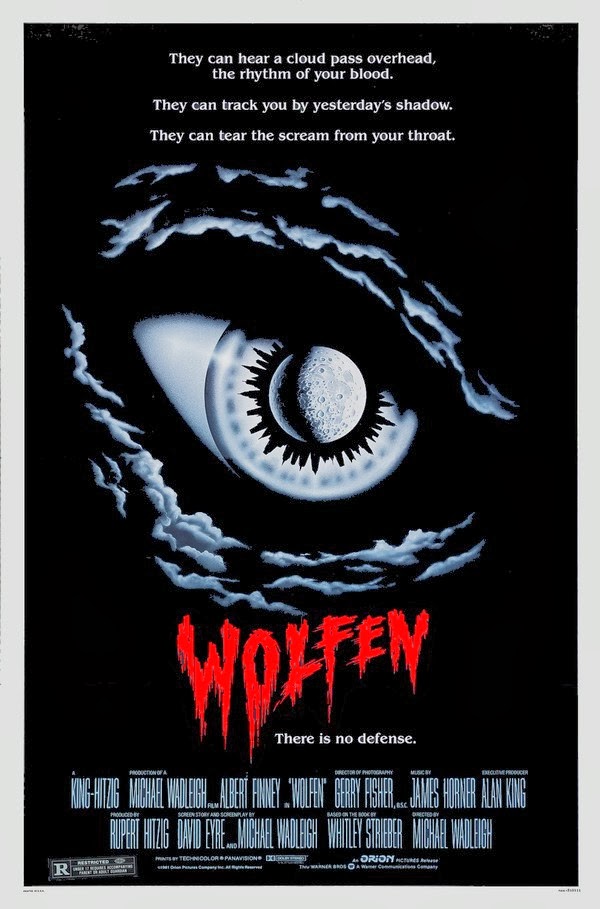 1981, ha ha! No less an authority than Cinefantastique magazine named it The Year Of The Werewolf! This was the period that brought us The Howling, An American Werewolf in London, Larry Cohen's Full Moon High, and this non-shapeshifting variation, Wolfen! Ha ha, it’s the odd canis lupus out, I guess – and an odd movie in so many ways!
Ha ha, let’s start with the director! I’ve always wondered how this project came about, it being the second feature made (after a ten-year gap) by the director of Woodstock! Ha ha, a horror movie about killer wolves is about the last thing you’d expect a guy like that to make, and I really can’t imagine how he hooked up with it! And I know the thing was reworked a lot after Wadleigh was fired late in the game, but I still say he did a good job with it! You can tell just from the way the movie looks and feels, the way the scenes play out!
The movie starts with the killing of a couple of rich folks out for a midnight ride in their limo! They drive to Battery Park (it’s a New York movie, I should mention) and are set upon by creatures we don’t see, but who possess heat vision similar to that of the alien in Predator! The next thing you know, rumpled detective Albert “Skyfall” Finney is on the case, and he forms an investigative team with Diane Venora from F/X, who is some sort of vaguely defined general-purpose specialist, and, separately, with superfunk coroner Gregory Hines! It’s never really explained why a coroner would end up patrolling the South Bronx wastelands with a parabolic microphone and a high-powered rifle, but I assume all of these questions were answered in Wadleigh’s (reported) four-hour original cut!
The investigation reveals there’s a pack of wolves of nearly mythic capabilities who live in slums and survive by eating down-and-outers who are unlikely to be missed! Only the Native populations know about these animals, because that’s just the sort of thing they know about in movies like this! But the wolves were feeling territorially threatened first by the rich land developer, and thence by Finney, Venora, Hines and gangly Tom “Manhunter” Noonan, the animal expert helping them out! Ha ha, so the wolves take action!
There’s all sorts of political – well, subtext is the wrong word; trowelled-on text is probably more appropriate! There’s also a bit of the old tomato paste, with bitten-off hands, ripped-out throats and, just as in An American Werewolf in London, a scene in which a wolf jumps at a stodgy police inspector and rips his head off! There’s terrific widescreen cinematography from Gerry Fisher, who did such beautiful work on Malpertuis, and a fairly complex sound design, which draws a parallel between the wolves’ extraordinary sensory apparatus and the most modern surveillance technology!
Gregory Hines gives a performance as likeable as his turn in Running Scared! He was a talented man who left us much too young, and I was sad when he died! Finney is pretty good too, with his weird attempt at a New York accent, his shaggy hairstyle and his constant eating! There are all sorts of interesting actors lurking in the margins, like Edward James “Blade Runner” Olmos, Dehl “Bullies” Berti, James “Armed and Dangerous” Tolkan and Reginald “Die Hard 2” VelJohnson! And Dick O’Neil, an uncelebrated actor, gives a very nice performance as the soon-to-be-lidless police inspector!
The picture has its dull points and digressions though (ha ha, what could that four-hour cut have been like?), underlined by, for example, Finney’s last line in a complete dead-end of a sequence involving SLA-type domestic terrorists! “Where does that leave us?” he is asked after an interrogation proves fruitless! “Like this just didn’t happen,” Finney replies! Ha ha, thanks for pointing out the pointlessness of the last fifteen minutes, filmmakers! I also admit to being slightly disappointed by the creatures themselves - though the fact that they're really just normal-looking wolves fits the picture thematically, it would have been nice to see something more monstrous, along the line perhaps of the alien gorillawolves in Attack the Block!
But I still maintain a stubborn admiration for Wolfen, because it tries to be something different and because it is in so many ways a good movie! It has some amazing scenes of Finney and Olmos up on the top of a bridge (no trick effects here, ha ha!), a plausible investigation (which excuses the digressions somewhat), an elegant if unlikely conception of its creatures, and its heart in the right place! I give Wolfen three talking heads!
Posted by Burl at 11:27