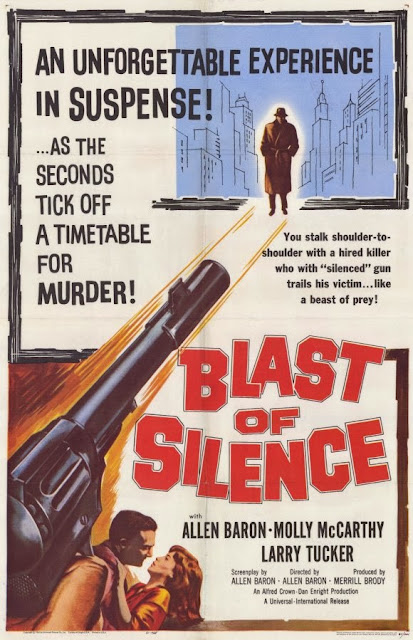 Ha ha, best of the season, it’s Burl! Yes, it’s true that everyone has their own anti-Noël picture: the movie they think best represents the very antithesis of the Christmas season while still being in some way a Christmas movie! Bad Santa is the counterseasonal picture of choice for most people, I believe, but ha ha, I’ve never even seen that one!
My choice for least-Christmasy Christmas movie has got to be the great Blast of Silence! Ha ha, it’s a terrific, grotty little dinge-fest about a hit man arriving in New York at holiday time to do a rub-out! The picture follows Baby Boy Frankie Bono (played by the picture’s director, Allen Baron) as he undertakes his preparations, hectored every step of the way by barky second-person narration from Lionel “Cul-de-sac” Stander! Ha ha, it’s moida!
Baby Boy Frankie Bono wanders the streets of the Big Apple, following his target and arranging for his weapon from the unsavory behemoth Ralphie! There are complications galore: Ralphie proves untrustworthy and must himself be rubbed out – no easy task, as he’s stronger that a house! And Baby Boy Frankie Bono runs into an old orphanage pal and gets drawn into a Christmas party situation, where he pushes a peanut across the floor with his nose and makes time with an old flame before completely ruining everything with his uncouth ways!
Stander’s narration is constantly referencing the temperature and relative humidity of Baby Boy Frankie Bono’s hands! This varies according to the situations he’s in or about to be in, and by the end of course, because this is a noir, and a particularly grim one at that, his hands are about as cold as they can get!
As with the tonally similar Killer’s Kiss, the picture serves as a great picturebook of mid-century New York at its least picturesque! It’s worth watching for that reason alone, but the hopeless fatalism and hi-test cynicism really put the icing on this pair of Dutchman’s breeches! The character of Ralphie, played by Larry “Shock Corridor” Tucker, is another highlight – he’s so greasy you can imagine the yellowclear stains he’d leave on a paper towel if you mopped his slablike forehead! Ha ha!
It’s a terrific little picture, and like all low-budget black-and-white crime movies, it looks great! If you want to watch a Christmas picture just because it’s that time of year, but you’ve already seen A Christmas Story and Christmas Vacation and Yosh and Stan Schmenge Present Christmas In Leutonia, this is the picture for you! I give Blast of Silence three and a half balding bongo players who are dressed in black all the ti-i-ime!
Posted by Burl at 13:16