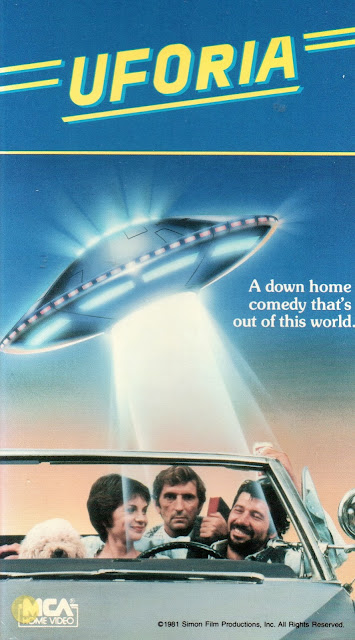 Ha ha, here’s Burl with a Quirky Cult Classic for you! I’ve known for years about UFOria, a little-celebrated character comedy made in 1980 or thereabouts! (1981 is the copyright date on the picture, but it wasn’t released until 1985!) But I never did watch it, because I figured it would be a little too self-consciously quirky, and also because I simply didn’t (and still don’t!) like the title!
But I finally purchased the VHS tape of this movie, which is what you have to do because it’s not on DVD! (Of course, like so many movies you can probably track it down online, ha ha!) And when I watched it I was most pleasantly surprised! Yes, it’s a classic 80s quirkfest, but it was probably the first classic 80s quirkfest, which makes it the godfather to pictures like Repo Man (with which it shares the great Harry Dean Stanton), Stranger Than Paradise, Rubin and Ed, and so forth! (And I realize that many of you, like me, might shy away from anything described as “quirky,” but I haven’t got a more apt descriptor handy! "Eccentric" is better, maybe!)
It takes a tone I might call realistic-quirky, at least until the end! The picture begins by introducing us to Sheldon, a drifter who steals money from con-dom machines to pay for his gas, played by Fred “Secret Admirer” Ward! He stages an Animal House-style supermarket shoplifting caper, but is eyeballed by born-again UFO enthusiast Arlene (the only name possible for this character), who is played by Shirley herself, Cindy Williams! Later Sheldon renews his acquaintance with Brother Bud, a tent preacherman played by Stanton, and while he’s playing the part of a lame man responding to Bud’s healing powers, the disapproving Arlene catches him out again! Naturally a rocky romance ensues!
Complicating things are Sheldon’s rambling tendencies and Arlene’s fervent, dream-based belief that a UFO will be landing on earth shortly and will be picking up passengers! As Sheldon and Arlene’s love affair progresses, a strange new community is born around them: Bud’s bodybuilding true-believer assistant Emile, played by Robert Gray from Innerspace and Armed and Dangerous (ha ha, muscle guys are a staple of 80s quirkomedies – remember Echo Park?); the Old Colonel, played by the terrific Hank Worden (whom you know as Shopping Cart from Big Wednesday and (I think!) the “Somebody’s fiddle!” guy from The Searchers!); a pair of New Age parents, who’ve just named their child Krishna Jesus; and an elderly couple who’ve just suffered a UFO encounter of their own, very well performed by Peggy McKay and the great Harry Carey Jr.!
This really is a marvelous and entertaining film, much better than you think it will be, even if you think it’ll be pretty good! There's a terrific country soundtrack, with songs by Roger Miller, John Prine, Emmylou Harris and of course Waylon! I’ll leave unanswered the question of whether the UFO ever arrives, but you can fit this picture beside such works as Breaking the Waves and Repo Man in the Movies In Which The Supernatural Or Otherworldy Intrude At The Last Moment category! Ha ha! Anyway, UFOria is a great, weird, affecting little picture in the dusty American Southwest tradition, and I give it three and a half heelocopters!
Posted by Burl at 12:39