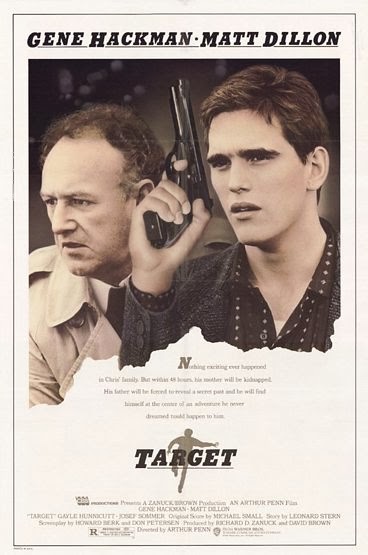 Burl here, people! Yes, Burl! I’m here to review another forgotten 80s picture, a semi-homburg picture called Target! This is the one that should have been good because, like the great Night Moves, it features Gene “The Quick and the Dead” Hackman and was directed by Arthur “Penn & Teller Get Killed” Penn! But the reviews suggested it didn’t turn out quite as well as that earlier private eye picture, and so I never bothered committing 117 minutes to Target… until just recently!
As it turns out, just about everything that went right with Night Moves went wrong with Target! Ha ha, it’s hard to conceive how it could have been much worse – maybe it would have been had they cast Ryan O’Neal or somebody instead of Hackman, who always brings at least a gruff plausibility to his roles, however outlandish or dumb they may be!
And his role here is pretty outlandish and dumb! He plays “Walter Lloyd” (not his real name!), a humdrum Dallas-area lumberyard owner who, it turns out, used to be a super CIA agent! Ha ha, it’s a toss-up which identity Hackman is most ill-suited to! Walter has a spiky relationship with his sullen son Chris, played by The Flamingo Kid himself, Matt Dillon; but the two must work together, and Hackman must spill the secrets of his past, when their wife/mother is kidnapped while on some kind of package tour through Europe!
Ha ha, so father and son hop on a plane, and the rest of the picture is their quest to find Mrs. Lloyd! But her situation never seems to worry them much – there’s even a romantic fireside scene between Walter and one of his old flames, also a spy! There are plenty of arguments between père and fils, and occasionally there will be an action scene! These prove beyond a doubt that action is not Penn’s specialty, or else he was profoundly disinterested in it around about the mid 80s! Ha ha, these scenes are both dull and incomprehensible, and really should have been handled by, say, John Frankenheimer or someone like that! And the whole thing looks dull too, with grim, overcast photography by Jean “Moonraker” Tournier! The picture takes place, and I believe was actually shot, in Dallas, Paris, Hamburg and Berlin, but it could all have been filmed in back-alley Cleveland for all you see of these cities! I’m not asking for postcard shots of the Eiffel Tower, but, ha ha, throw us a bone here!
Nothing in the picture rings the least bit true! The musical score is terrible, the acting generally lousy and the bad guy is exactly who you think it is! A young backpack lady shows up repeatedly and eventually almost seduces Chris with her wiles and her breasts, but after a dreadfully unsuspenseful suspense scene, she gets a headknock and disappears from the scene without any explanation for what she was ever doing there in the first place! Ha ha, it’s really terrible storytelling!
Hackman is about the only virtue here! I couldn’t find anything else to like, and I’m frankly surprised I made it through the whole picture! Like I said, ha ha, the darn thing is nearly two hours long! It could have been a fine little thriller and a nice addition to the father/son genre, but they just squandered any possibility the thing ever had! I give Target a big boo and one half of an explosion chair!
Posted by Burl at 20:59