Burl reviews The Witches of Eastwick! (1987) 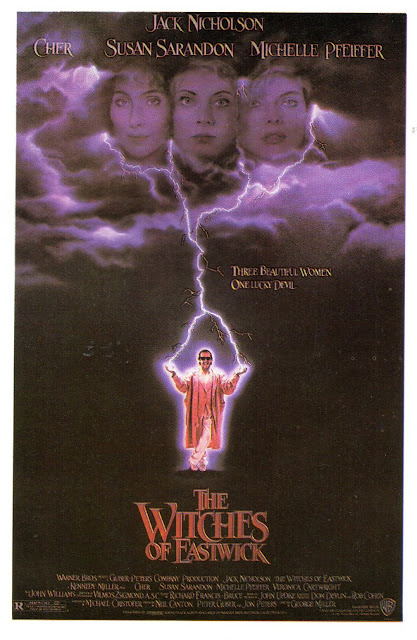 Ha ha, let us briefly consider the career of George Miller! No, not George “The Man From Snowy River” Miller, the other one! (It’s amusing that both these Millers are Australian, ha ha!) The Miller we’re concerned with today started out as a doctor, they say! Then he made a terrific car crash picture, Mad Max! He followed that up with an even better car crash picture, Mad Max 2, better known as The Road Warrior! Then he took a brief detour and made the best segment in the Twilight Zone movie, and after that paired up with another director named George (Ogilvie, not the other Miller for some reason) and made yet another car crash picture, Mad Max Beyond Thunderdome!
Ha ha, so there he sits, the Car Crash King from Down Under, waiting for Hollywood to come a-knocking! And they did, probably with car crash scripts under their arms! But what Miller ended up doing, strangely enough, was the picture ol’ Burl is reviewing for you today, The Witches of Eastwick!
I remember thinking at the time “Ha ha, that’s weird!” But I dutifully went to see the picture anyway, being that I was a fan of the car crash pictures and had been assured by Fangoria magazine that the new movie contained Special Makeup Effects by a master of that art, Rob “The Thing” Bottin! And indeed it did! But first there was a whole lot of Battle of the Sexes satire – a big thing in late-80s cinema, ha ha – and showcase moments for Jack Nicholson in his role as the devil! You can practically see the cast and crew moving furniture out of the way to make room for Jack to do his thing, and flashbacks from The Shining are a distinct possibility!
The picture takes place in the button-down New England community of Eastwick, where three divorcées (or widows in one case) are, unbeknownst to even themselves, either straight-up witches or just possessed of a feminine power that allows them to cause strange happenings when they all concentrate together! Of course the three ladies are played by Cher, Susan Sarandon and Michelle Pfeiffer, because who else at that time could have played those roles? Oh sure, Glenn Close, Kelly McGillis and Daryl Hannah might have done fine, but, ha ha, would they have played tennis quite as well?
Anyway, they conjure up Jack one rainy night, and he seduces them one by one, and then they all live together for a time in a state of bacchanalian bliss, and the townsfolk, led by the slowly-going-insane Veronica “Alien” Cartwright, turn against them; and then the third act is filled with trick effects as the ladies try to get rid of their new friend!
It’s a reasonably sprightly picture, generally very pleasant to look at, and Miller does a good job of directing it! There’s even a car chase, ha ha, and some good trick effects! Nicholson becomes a giant creature of some kind, and then turns into what can only be described as a bugchild! And there are some solid actors in the margins: outside of Cartwright, who gives a very game performance, you have Carel Struycken, well known from his performance in The Prey, as the manservant Fidel, and Richard Jenkins, looking pretty much the same as he would in The Cabin in the Woods, Killing Them Softly and Jack Reacher twenty-five years later!
But it’s also got a lot less going on than it thinks it does, and if it ever did have an edge to it – I believe it was thought to back in the 80s – then the passage of time has sanded it off! As well, as other reviewers have pointed out, every scene seems to repeat itself three times out of the equal-billing-and-screen-time contractual obligations that came with the three starlets! It gets a bit much, and the picture seems overlong as a result! You sure can't accuse The Road Warrior of that, ha ha! So after some thought, I’m going to give The Witches of Eastwick two broken voo-doo dolls!
Posted by Burl at 16:36