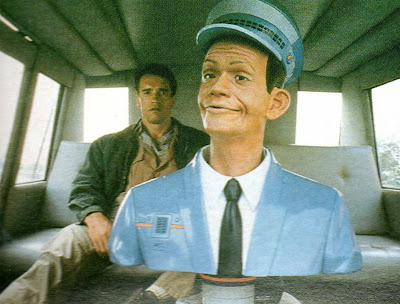 Ha ha, drive, chust drive! Yes, it’s Burl, here to review a sci-fi picture from the director of Robocop! It’s Total Recall, and it’s probably one of the smartest pictures – and one of the best too – that old Arnie ever made!
Arnie plays a Mars-obsessed construction worker in future-times, just another Larry Lunchbox! He decides to get an artificial Mars vacation memory implanted in his mind, but things go haywire after that! All of a sudden Harry from work turns against him, his loving wife Sharon “The Quick and the Dead” Stone is shooting at him, and Michael “Watchers” Ironside is trying to kill him with the explosive energy one usually reserves for important tennis matches! Ha ha, is it all for real, or is it just his secret-agent Mars vacation playing itself out? In either case, Arnie goes from Joe Punchclock to Johann Whupass pretty quickly!
The question of true reality recurs now and again throughout the picture, most effectively in a scene with a cringing executive who appears in his Martian hotel room and does a pretty good job of convincing Arnie (and us!) that he’s not on Mars at all, just gone loco while sitting in his memory implant chair! It would have been nice to have more such scenes, but because the hero is played by Arnie, there’s never much doubt that he’s really doing all the heroic acts he seems to be doing! Though, ha ha, it’s fun to consider that he has just gone completely bugs! The last act, existentially speaking, is quite extraordinary, as it chronicles the desperate attempts of a dreamed individual, Quaid, to assert his reality at the expense of the real person whose body he inhabits!
It’s a pretty violent picture! It’s one of those where the future guns don’t just make holes, but take big steak-sized chunks out of the people getting shot! And there are plenty of pokings also, and of course the hilarious Martian Head Expansions, complete with bulging eyes and fat, twitching tongues, all courtesy of the very talented Rob “Explorers” Bottin! (I thought some of the Mars mutants were a bit goofy looking, though!) All the other trick effects are well done too, and one shot, the secretary doing her fingernails, was a particular bafflement to my friend Sean and I when we saw it in the theatre!
It’s a fast-paced picture that along the way meditates on the nature of reality and of self; and it has a lady with three boobs! Ha ha, how can you go wrong? Arnold gets a chance to play happy hubby, and to also be a smarmy, cigar-chomping bad guy in a series of videos through which he entertains and enlightens his more quotidian personality! Lots of great faces in the cast – Ronny “The Beast Within” Cox does his usual great heavy, Robert “Matinee” Picardo does as good a Johnnycab as could be done, and Marshall Bell, the rubber-daddy coach from A Nightmare on Elm Street part 2, makes an excellent Mr. Kuato, or at least chauffeur to Mr. Kuato – and also a few that were never seen again (by me anyway!), like leading lady Rachel Ticotin or second banana baddie Mel Johnson Jr., the guy who plays Benny!
Even though it’s dumb in some places and goofily implausible in others, I consider Total Recall to be a pretty solid Hollywood space-action picture, and I’m going to give it three boobs! Ha ha!
Posted by Burl at 00:13

Email ThisBlogThis!Share to TwitterShare to FacebookShare to Pinterest
Labels: 1990s, action, saw it on the big screen, Schwarzenegger, sci-fi