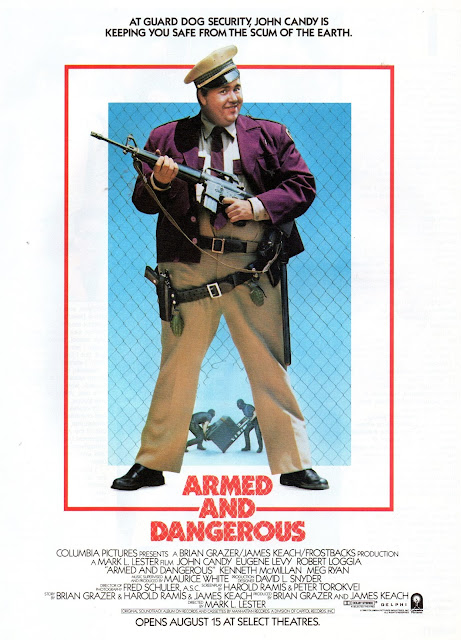 Ha ha, yes, it’s Burl here, once again catching up with a 1980s comedy movie I’d never before seen! This time it’s Armed and Dangerous, a buddy picture featuring two stars of the great SCTV show – possibly my all-time favourite television program ever produced!
John “Brewster’s Millions” Candy and Eugene “Cannibal Girls” Levy are the two buddies, but of course the poster makes it look as though it’s a one-man Candy show! Ha ha, he was certainly the larger star back in 1986! But it’s safe to say that, while this picture gives the big man some choice comedy moments, it’s yet another in the string of movies – Summer Rental, The Great Outdoors, Delirious – that failed to capitalize on the Canuck laff-laff genius he embodied!
Candy plays a cop on the beat who catches some fellow officers stealing TV sets! The tables are turned and it is Candy himself who is ejected from the force! Meanwhile lawyer Levy is disbarred for being not a very good lawyer! Neither of these fellows, it should be noted, are through-and-through bunglers – Candy even makes the claim that he was a particularly good cop! Still, they both end up working as security guards at an operation run by Kenneth Mac “Protocol” Millan, and staffed by his daughter, Meg “Innerspace” Ryan! Ha ha, it was a real confusion for me, trying to decide which of these two fellows would claim Ms. Ryan as his love interest! Eugene Levy, it turns out, in the most perfunctory romantic subplot of the year!
The action part of the story begins when the boys realize that the union they’ve been forced to join is run by crooks! Ha ha, the fact that Robert Loggia, well known from Psycho II and Over the Top, is their union boss ought to have been a tip-off! And the fact that a union is being represented at all in a Reagan-era mainstream movie ought to have been another! Ha ha, it wasn’t the most union-friendly era in American history, was it! But I wonder how all the brothers and sisters of the I.A.T.S.E. felt about working on such a flagrantly anti-union picture!
Anyway, in a comedy like this it’s just a plot mechanism and not to be taken very seriously! What the movie does try to take seriously is its action scenes, which are pretty generic, but more spectacular than I was expecting! The movie was directed by Mark L. Lester, who made Truck Stop Women and Roller Boogie, and before this had just finished Commando, one of the finest and most explosive Arnie pictures! So no wonder Armed and Dangerous has so many splosions of its own!
Ha ha, but do you want to know the most unexpected part? I actually found this picture somewhat funny! Yes, if you had been there you would have heard ol’ Burl give off a chuckle or two! I thought it would be a laff-free zone along the line of Moving Violations, but no! Candy and Levy both deliver solid performances and create actual characters; the supporting cast is strong (Brion “Blade Runner” James, James “Wolfen” Tolkan, Don “Explosion” Stroud and Tiny “Blue City” Lister are all in there, with a special friendly appearance from David “Swamp Thing” Hess! Ha ha, quite a gang!); and the picture is slick and well-paced! It’s hardly the greatest thing since graham crackers, but I’ll give Armed and Dangerous two Steve "Lifeforce" Railsback cameos!
Posted by Burl at 09:44