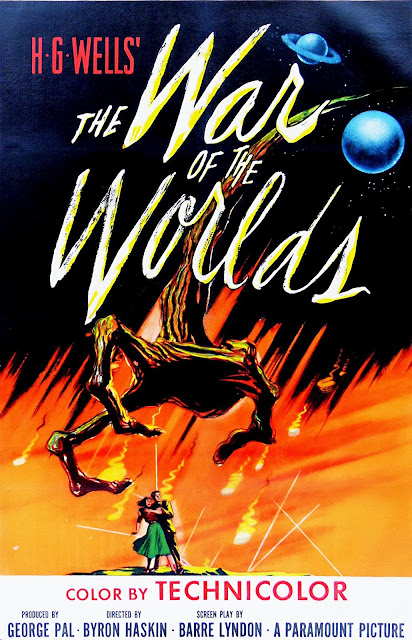 Tiewww-tiew-tiew-tiew-tiew, it’s Burl! Ha ha, yes, I’m here to review a terrific old science-fiction invasion picture for you – one of the granddaddies of the form, in fact! It’s the fine old original pre-Spielberg version of The War of the Worlds!
Now, ol’ Burl has a confession to make here! Ha ha, despite seeing clips of the movie (it appears at the beginning of Explorers, for instance) and bits and pieces of it on television over the years, I don’t think I’d ever actually sat down and watched it before now! I know, it’s incredible! Well I’ve rectified that particular oversight, and now you get to read all about it!
Ha ha, between the H. G. Wells book, the Orson Welles radio broadcast, this picture, the TV series, the Spielberg remake and the low-budget versions that followed, we all know the basic plot: Martians attack, kill everyone they see, but are themselves felled by germs! In this iteration, Dr. Clayton Forrester, the world expert on all science pertinent to Martian invasions, happens to be fishing near the site of the first arriving Martian cylinder! He meets up with local teacher and science groupie Sylvia Van Buren, and together they run, dive, duck and huddle their way through the whole disastrous incursion!
They get separated towards the end though, and the movie gets a bit churchy when, figuring from an earlier monologue that Sylvia will seek sanctuary in some Los Angeles House of God, Dr. Clayton pops his head into a number of them and finds people singing and praying for some miraculous salvation – and of course this is soon delivered! But of course if the Lord had wanted to provide some kind of protection, He might have stepped in a bit earlier, one might be forgiven for thinking – perhaps earlier, when Sylvia’s pastor uncle sacrifices himself in an effort to communicate with the blobby aliens! Ha ha, where’s a five-foot-nothing crane operator with a grenade belt when you need one!
This picture has a great Technicolor look, marvelous spaceships and props, terrific trick effects, iconic sound design and a fantastic cast! Gene Barry, familiar from Soldier of Fortune and many other pictures, makes a forceful Clayton Forrester, and Ann Robinson, playing his companion Sylvia, is a bit screamy, but not at all bad! Les Tremayne, whom we know from Holy Wednesday and The Monster Of Piedras Blancas, is great as the frustrated general, who can’t comprehend that anything might be able to resist his guns, tanks and bombs; Jack Kruschen of Satan’s Cheerleaders plays an ill-fated enchilada salesman; and of course we know Robert Cornthwaite not just from his cameo in Matinee, but from an even earlier alien invasion picture, Howard Hawks’s The Thing From Another World! Lewis Martin, playing the pastor, had tangled with Martians before in Red Planet Mars, so it’s a surprise to see him so incautious here! And Paul Frees, well known for his narration in pictures as diverse as The Errand Boy and The Milpitas Monster, provides narration here too, and appears as a radio reporter with no radio to report to! Ha ha!
I’m certainly glad to have caught up with this fine old picture, and I hereby award The War of the Worlds three ashen bodyshadows!
Posted by Burl at 17:52