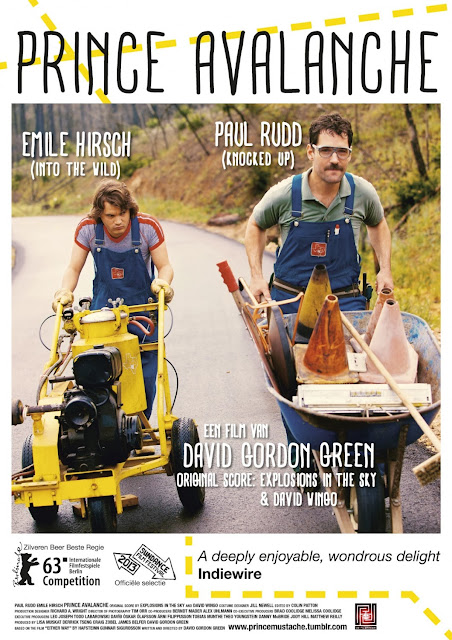 Ha ha, with a sharp report it’s Burl, here to review a recent small-scale dramedy, Prince Avalanche! Oh, sweet wingalls, how I frown on that word, “dramedy!” And I’d wager two pounds of mackerel that the makers of Prince Avalanche hate it too!
It’s a picture from the young man who made All The Real Girls and Pineapple Express! This new picture is a sort of synthesis of those movies, a lovely-to-look-at character study of two fellows hard at work in a remote, burned-out forest area of Texas, circa 1988! Ha ha, why 1988? It’s hard to say, but maybe the setting is merely a device to keep cellular telephones out of the picture!
The two fellows are Alvin, played by Paul “Halloween: The Curse of Michael Myers” Rudd and a moustache, and Lance, played by Emile “Killer Joe” Hirsch! Ha ha, there’s not a lot of love flowing between these two men, and their rapport only gets worse as the story progresses! Their work painting road lines and knocking in signs is periodically interrupted by a mysterious truck-driving elderly who provides them with hooch! The hooch in turn provides the picture with an opportunity for the two fellows to relax a bit and make friends! Ha ha, the last act gets pretty heartwarming!
I guess mainly this is about the clashing personalities of Alvin and Lance! Lance, a part-time hardrocker, is the sententious Alvin’s girlfriend’s brother, so when she breaks up with him by letter and by telephone, all sense of obligation is out the window, and Alvin may feel free to bludgeon Lance with a rolled-up magazine! But it all ends up in friendliness!
It’s a pretty breezy little picture, small-scale and as slow-moving as a line-painting machine! It looks lovely, thanks to a genuinely burned-out location and beautiful cinematography from Tim Orr! Ha ha, there’s a tuneful musical score and a mellow vibe, and, unusually for this director, not a marijuana in sight! (A touch of green would have fit in pretty well, though!)
I enjoyed the picture! It’s fairly easily forgotten and not likely to become anyone’s favourite, but it’s pleasant to look at and listen to, and often funny! I’m going to give Prince Avalanche two and a half car-birds and a recommendation that you check it out!
Posted by Burl at 15:10