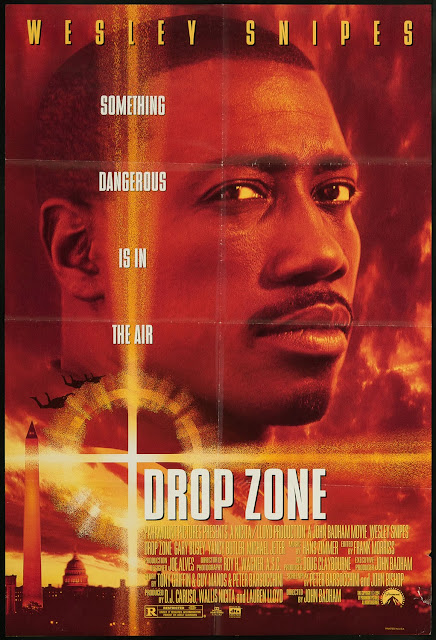 Whoosh, it’s Burl! Ha ha, yes, I’m here to review a parachuting picture, Drop Zone! That was one of two released in 1994 (the other was Terminal Velocity), which makes it part of the Double-Double phenomenon right alongside Dante’s Peak/Volcano, Babe/Gordy, Armageddon/Deep Impact, Olympus Has Fallen/White House Down, and of course all those body switch pictures!
I haven’t seen Terminal Velocity (yet!), so I can’t tell you which one is better! But Drop Zone, directed by John Badham during his Peter Hyams period, is the one with Wesley Snipes jumping (ha ha!) into the crazy world of daredevil skydivers! He plays some kind of policeman who, in escorting a computer nerd prisoner by commercial aircraft, loses both the prisoner and his fellow cop, who happens to be his brother, to a band of parachute criminals led by Gary “Big Wednesday” Busey! Well, nobody believes Wesley that parachute criminals even exist, and when a remorseful captain strips him of his badge and gun (ha ha!), he must fight to clear he and his brother’s names from without the system, and even sell his car to finance his investigation!
Ha ha, after a rocky start with parachuting enthusiast Yancy (ha ha!) Butler, wherein she dumps Snipes out of her plane without a parachute (for which, after she rescues him, he places a well-deserved punching on her), the two team up to fight Busey and his flying nogoodniks! There are some mid-air adventures along the line of Moonraker’s opening scene, but curiously not one character dies from straight-up plummeting from an airplane! There are close shaves, and one character who almost dies that way, and then of course Busey plummets from a tall building at the end, flying like Superman into the cab of his friend’s truck, but that’s it!
I guess it has nothing to do with whether the picture is good or not, but I still found it odd! Also unusual is that, to my recollection, the movie contains virtually no explosions! Otherwise, this is a pretty garden-variety 90s action movie, with several punch-ups and some of what they call “creative kills,” like a death-by-photocopier! Ha ha! It’s a pretty well-paced picture, generously budgeted, solidly directed by an old pro, and every bit as dumb as it wants to be!
It tries really hard to be one of those pictures that immerses you in a specialized world of enthusiasts, dropping their lingua-franca with the clumsy regularity of a palsied waiter dropping spoons! It never seems very authentic though, and doesn’t encourage you to care whether or not it really is! Ha ha, I’ve actually jumped out of a plane myself, more than once, and it was still all just crazy jargon to me!
Wesley Snipes doesn’t make much of an impression as an action hero here, but then he doesn’t get any lines like “Ha ha, always bet on black!,” as he did in Passenger 57! So maybe it’s not all his fault! Anyway, Drop Zone is as disposable as they come, and I’m going to give it one and a half Busey-missiles!
Posted by Burl at 23:33