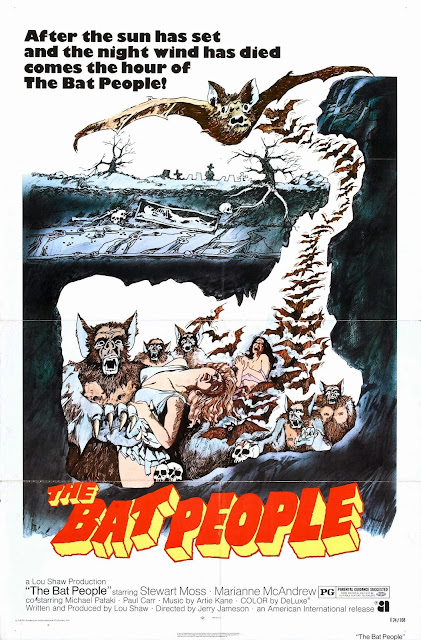 Chp chp chp, it’s Burl, here to review a 1970s bat picture for you! Ha ha, no, not Nightwing – I did that one already! No, nor Bats, which was a 90s picture anyway! This one is called The Bat People, but despite that title, there’s really only one bat person in it!
It’s another non-wolf shapeshifter movie, very reminiscent of The Beast Within (and in fact the two pictures were paired up for a DVD release I believe!) or The Blood Beast Terror or The Vulture, but with a distinctly 70s TV movie vibe! It wasn’t a TV movie, but it sure feels like one, and with its frequent ski resort scenes and POV attacks, it feels like Snowbeast in particular!
Our story begins with a young (-ish!) married couple on a combination honeymoon / chiropterological outing! Yes, Dr. John is interested in taking organized cave tours so he can look at bats, while his wife Cathy would prefer to have a regular honeymoon! But they go to the cave anyway, and while looking for a comfy place to engage in married persons’ ponky, Cathy blunders into a bughole! Dr. John blunders on after her and the result is: batbite! Ha ha!
Naturally this has some unpleasant consequences! Dr. John has personality shifts where he turns into a big jerk for no reason at all! Then come the spaz-outs, and then the floppy rubber hand stage, and this is followed by homicidal bat-mania! The little town, which seems perched at the edge of a dimensional gateway between the Carlsbad Caverns and a Northern California holiday mountain, is soon the scene of bat-mayhem, with nurses, pot smokers and stewbums all on the menu! A local moustache cop played by Michael Pataki suspects Dr. John from the very beginning, and dogs him unmercifully for the rest of the picture!
Speaking of moustachemen, I forgot to mention the ponky moustache doctor who takes on Dr. John’s case near the beginning of the movie, but the whole time he really only wants to go skiing! Ha ha, he sports a fulsome beauty of a chevron, and I guess he does his best medically, but he really isn’t very helpful with the bat problem! However, taken as a pair with the cop (who sort of takes over ‘stache duties for the picture’s second half, and whose personality is distinctly opposite to the doctor’s) the two make a nice pair of bushy bookends!
One thing I’ve always shied away from in my drama movies is stories where one half of a previously happy married couple is possessed and is mean for no reason! This picture has a lot of that, and I didn’t like it! It also has a tremendous amount of chatter, and though it’s only 95 minutes long, it seems to last forever! Ha ha! There’s lots of creeping around in dark places too, and when the monster does strike, the attacks usually take the form of lame fisheye chases right out of Bog!
But there were some scenes I liked! The bat-man steals an ambulance at one point, and a pretty good chase ensues! The opening scene with the bugs and bats is creepy, as is the scene where the cop visits the wife and suddenly turns aggressive and tries to make sweet love to her! (He comes to a pretty horrific end, a little disproportionate to his crimes, I thought!) The scene with the stewbum is strong too – he pulls off his own transformation from comedy drunk to desperate depressive, and thence of course to bat chow! And there’s a remarkable scene in which Dr. John, well along in his batmorph, finds the time to make sweet love to his wife; and he does a pretty good job of it too with those scrabbling claws and chittering teeth!
Finally there’s the ending, which I confess came out of left field, but satisfied! Still, even with all of these positive elements, it can’t be denied that this is a pretty boring movie that fails to live up to its potential! You may enjoy it if you like Curse of the Black Widow and TV movies of that ilk! I’m going to give The Bat People one and a half pug nosed bat masks!
Posted by Burl at 13:20