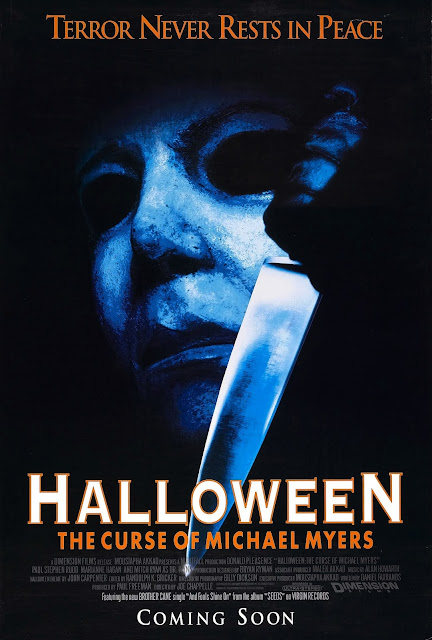 Ha-ha-happy Halloween everybody, it’s Burl! And yes, I’m here with a review of one of the Halloween pictures! It’s not one of the best of them, nor is it one of the worst, but with stinkeroos like Halloween 5 and Halloween: Resurrection to choose from, that’s not saying much! This middling effort, which really isn’t all that good at all, is Halloween: The Curse of Michael Myers, the sixth of them if you’re counting!

Whatever you think of it, though, it’s a part of history, being as it is the very last appearance of Donald Pleasence, the marvelous actor we recall from his turn as Blofeld in You Only Live Twice and of course his role as the worm-addled doctor in The Devonsville Terror! And it’s also among the first appearances from Paul Rudd, who became famous for his comedy in pictures like Our Idiot Brother, and lately, for his superheroism as the man-ant!

Pleasance is playing good old - very old - Dr. Loomis, now more enfeebled than mad, while Rudd has taken the role of Tommy Doyle, the little boy who caught affrights in the original Halloween! Thanks to his terrible experience on Halloween of 1978, Tommy has become the sort of eccentric who keeps Michael Myers clippings on his wall and a photograph of Divine on his fridge, and as far as the rest of the neighbourhood is concerned, he’s the creepyweird guy across the street from the Strode family! Apparently the Strodes are being targeted for some reason that might have been outlined in the two previous movies, but which is so spurious a justification that I’ve completely forgotten it!

The confused narrative of this picture offers no clues, ha ha! We get to hang out a bit with the Strodes, a singularly unpleasant family who require no backstory to deserve the chop, says I! The dad is a horrible brutish hard case played by Bradford English from The Malibu Bikini Shop, and one is relieved when the electrical panel makes his head explode; the mother is a doormat essayed by Kim Darby, playing essentially the same character she did in Better Off Dead!

The picture begins with a baby born to a young lady who is then chased around by a black-clad Michael Myers cult led by Mitchell Ryan from Lethal Weapon, and by Michael himself! The chase leads to a bus station cursed with a very lax janitorial service, and while the young lady meets her doom at Michael’s hands, the baby is rescued by twitchy Tommy Doyle! Now, I don’t normally care for baby-in-peril stories, because I like babies and don’t want to see them jostled about! Of course the baby is mostly played by a rubber reproduction - ha ha, I’ve worked on a couple of movies with fake babies in them, and one was played by an item called Baby Accurate! I thought I recognized the touch of Baby Accurate in this film!

Anyway, the cult stuff is somehow very tiresome, and I don’t know if the alternate cut, known as the Producer’s Cut I believe, clears anything up, because I’ve never bothered to watch it! I saw this one in the theatre, and thought it was okay just because it’s exciting to see a Halloween picture on the big screen, but watching it again I do admit the exploding head is the best part! There’s an obnoxious radio host, a blonde kid with dark eyebrows who also gets terrorized, and a hilariously-edited scene at the end where Tommy Doyle goes ape on Michael’s head with a lead pipe!

It replaces the Panaglide style of the Carpenter movie with garish rock video lighting, though it does manage a bit of autumnal atmosphere here and there! In sum, it’s middling-to-bad, but it’s still a Halloween movie, and therefore you could do worse at this time of the year! I give Halloween: The Curse of Michael Myers one and a half self-defenestrations!