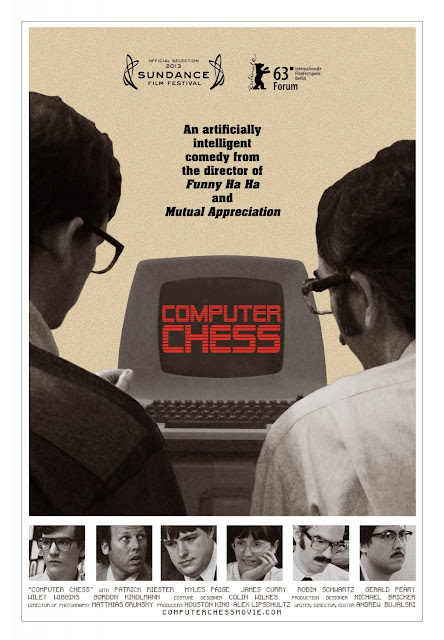 Burl to Queen’s Bishop five! Ha ha, checkmate! Yes, it’s Burl here to review a chess movie – except it’s not a chess movie so much as a computer movie, or maybe a nerd movie, or maybe something that’s all of those things but also something better! The picture is called Computer Chess, and it’s one of those rare feature films shot in black and white on old video cameras!
The picture stars a bunch of people who, with the exception of my old pal Wiley “Dazed & Confused” Wiggins and movie reviewer Gerald Peary, I’d never heard of before; but their performances are uniformly excellent! Ha ha, and the setup is a weekend competition taking place in a hotel somewhere in Texas, where tech organizations have brought their latest and greatest playing programs to pit them against one another! It’s nerds abounding, ha ha!
There are other groups in the hotel as well, including some kind of culty encounter workshop and a bunch of swingers! The computer guys’ interaction with these parties account for a great deal of the dramatic tension found in the picture! We also follow a self-important “independent programmer” as he tries to find a room to stay in, and the travails of one group whose program appears to be suiciding itself more quickly with every game! There are hints of shady backroom practices and sinister, Kubrickian implications that some of these computers are simply sick of being told what to do all the time!
The picture is part of what I think of as the same Texas tradition responsible for movies like Last Night at the Alamo and Slacker, and of course Future-Kill! A nice little corner on eccentric indie movies asserts itself every once in a while, and Computer Chess fits right in! It’s a funny picture but nevertheless not a comedy, and that’s usually my favourite kind of comedy, ha ha! And though I usually don’t gravitate toward the awkwardness movies, the extremely awkward scenes in this picture didn’t bother me – they worked as a bizarre admixture of comedy and suspense! The scene with the glasses nerd and the swingers is a particularly good example!
There’s also a terrific scene involving the roomless guy, Papageorge, and his mother and another fellow! This sequence is shot on colour 16mm film, and feels like a scene out of Demon Lover Diary or American Movie or something along that line! Like the rest of the picture, the scene uses its medium with elegance and wit, and hints at great insights about technology and human behavior and the intersection between the two; and somehow that the film never deigns to reveal these insights, at least not completely, feels like the greatest unrevealed insight of them all!
The ending of the movie is where some might throw up their hands and declare this some kind of Cronenberg-Lynch-Tsukamoto coattail rider, but I thought it worked very well! It’s handled with great competence, and really, of all the pictures you might expect to see a naked lady in the closing moments, this one is about the last! But still, there she is, and what happens next will invite a slight but definite mindboggling!
I enjoyed this picture a great deal, and for excellent ensemble acting, the courage of its formal convictions, the wit and restraint it showed in playing with the technology and era with which it concerns itself, I give Computer Chess three and a half fluffy ghost cats!
Posted by Burl at 21:43