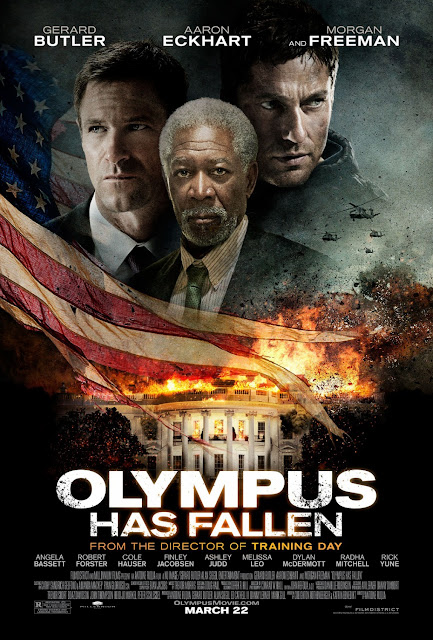 Ha ha, attention citizens! It’s Burl here with a review of some Contemporary Action Cinema! This picture is called Olympus Has Fallen, and it was one of two Die Hard-in-the-White House movies to come out in 2013! It’s a classic re-run of the Meteor Syndrome of 1998, with Deep Impact in May of that year and Armageddon coming in July, and Volcano Syndrome of 1997, when Dante’s Peak and Volcano came out within two months of one another! Ha ha, in the latter case, as I recall, I went to see them both! There was also Dinosaur Syndrome four years earlier – ha ha, I went to see both Carnosaur and its later imitator, Jurassic Park! And of course there was Mars Syndrome in 2000, President’s Daughter Syndrome in 2004 and Magician Syndrome in 2006, and many other examples too!
Of the two White House pictures, I’m guessing Olympus Has Fallen is the Carnosaur of the pair – the cheaper, scrappier, more violent iteration! It certainly has lots of CGI bloodshed and collateral damage! North Koreans, you see, mount a frontal assault on the presidential domicile, attacking it first with a plane (and shooting many a pedestrian in the process), and then with ground forces who’d been milling around disguised as tourists! And of course Gerard Butler, the man who used to guard the prexy before an unfortunate event involving the First Lady plunging into a river, happens by just as all this is taking place; and the next thing you know he’s skulking around the body-strewn corridors of power, having punchfights with any North Koreans he happens across!
Meanwhile President Aaron Eckhart is trapped in the bunker with members of his cabinet and a bunch of the bad guys, and a terrible punching is put on Secretary of Defense Melissa “Deadtime Stories” Leo; and on the other side of the Potomac, Speaker of the House Morgan “Outbreak” Freeman, Secret Service Director Lady Angela “Innocent Blood” Bassett and General Robert “Alligator” Forster all crease their brows as they try to figure out what to do! Strangely, as they chat with lone wolf Butler, not a one of them says “You know, ha ha, this is just like in Die Hard, right down to the terrorist henchman who sports the scraggly, stringy-haired look of Al Leong!”
And it is, except of course Butler is not only an ex-Secret Service man, but an ex-Elite Forces Agent or whatever! Ha ha, that’s the thing about Die Hard – Bruce Willis wasn’t an ex-anything, except an ex-husband! He was a cop, but a pretty meat-and-potatoes one! That’s because the makers of Die Hard had confidence in their material, and the people who made this one realized they were just doing a slavish, inspiration-free copy, so they had to make their hero a superman!
They also had to gin it up with some of the most egregious flag-waving seen in recent times! Ha ha, maybe that stars-and-stripes stuff works on Americans, or some of them anyway, but the rest of us are all, like, “Move on to the carnage, please!” But at the same time you can’t accuse the movie of lacking carnage! The White House invasion scene, wherein most of that ingredient is stored, is the most exciting part of the picture, that’s for sure, and the number of casualties is pretty high! Everything that comes after that is kind of anti-climactic, especially the relatively low-key final fight scene!
There’s not much style or panache here, and everything is as by-the-numbers as you can possibly imagine! The simpleton geopolitics fail to gain credibility even with Freeman’s impeccable diction, and the notion of putting vaguely Occupy-esque sentiments into the mouth of traitor Dylan McDermott (who has a previous Secret Service prexy-in-peril drama, In The Line Of Fire, to his credit) is just silly! Ha ha, they should have made him one of those Tea Party clowns!
Altogether, Olympus Has Fallen is a particularly blockheaded action picture with a few decent scenes and several unsavory ones, and for its all-star disaster movie vibe and surprisingly unannoying First Kid, I give it one and a half bullet-riddled flags tumbling sadly through the twilight’s last gleaming!
Posted by Burl at 10:55