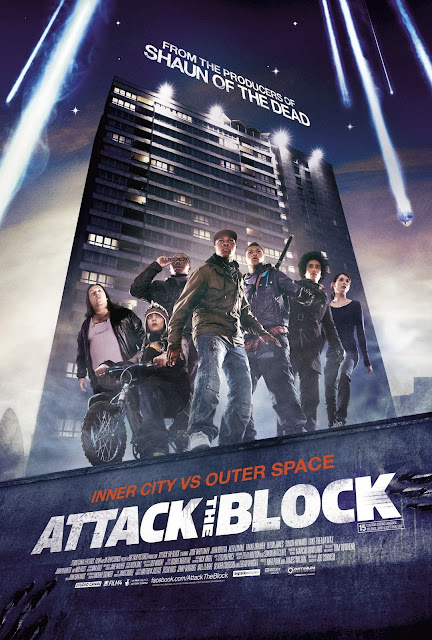 Ha ha, trust, it’s Burl here again wif anuvver movie review for ya! This is yet another picture set largely in a single tall building – ha ha, after Skyline, Die Hard, Enemy Territory, Gremlins 2, Poltergeist III and Dredd, you must think I’ve been seeking them out! But no, they come to me, and quite willingly too!
This one, Attack the Block, is a picture I’d been hearing marvelous things about for some time, so I thought, ha ha, let’s see what’s up here! It takes place in a block of council flats in South London, among the aimless, hoodie-clad youths who roam there! The movie starts out all Harry Brown, with a perfectly nice lady getting street-mugged by what appears to be a pretty unpleasant youth gang! Ha ha, the robbery is cut short by the arrival of a fireball from space, which lands in a car and disgorges a varmint of some kind! (Nobody notices the fireballs because, cleverly, the movie is set on Guy Fawkes’ night – and by complete chance I watched the movie on Guy Fawkes’ night! Ha ha!)
The kids manage to best the space varmint, but close on its tail are more of them, bigger in size and meaner in temperament, and they want revenge! They retreat into their block, where weed grower Ron (played by Nick Frost, who of course is famed for his role in another alien comedy from the same year, Paul) and several other characters reside! Ha ha, but there really aren’t that many people around for such a huge residential complex! I guess they couldn’t afford too many extras!
Anyway, the movie moves along pretty quickly and has some terrific laffs – Nick Frost has probably the single funniest line, ha ha! The critters are pretty basic, but look great – furry, deep-black gorilla-dog things with glowing blue lamprey teeth! They bound around like the Terror Dogs from Ghostbusters, snarling and slashing and biting off one poor fellow’s face! Ha ha, there are some nice, nasty moments! It’s a little like another kids–vs.–alien movie from 2011, Super 8, but in this one not all the kids make it to the end!
It’s a little surprising that the nasty street gang, who in another picture would probably be among the first victims of the otherworldly invaders, end up as our heroes! Turns out they’re not as bad as they first appear, and the lady they mugged actually teams up with them to battle the ape-nines! Ha ha, how the world turns! The other interesting thing is that the accents and slang are thicker than muesli, but I for one never had a moment’s trouble understanding what was being said! That’s a testament to the actors and to the general mise-en-scene too, I’d say!
Ha ha, as a little slice of space invasion the movie works very well, but it does seem strangely limited in scope too! Naturally there was no budget for a London-wide invasion, nor the desire for it either, and the focus on the kids and their narrow world is appreciated, but I guess what’s missing is the sense of greater potential or a vaster threat, as well as some idea why a bunch of dogs would arrive from space anyway! One of the kids, or maybe the trust-fund stoner who appears now and again, ventures a theory that they just drift through space like the Body Snatchers, alighting on whatever planet gets in their way, but this seems so unlikely as to be immediately dispensable! The Thing pulled off a similar scene, in the midst of a similarly focused invasion, with much better results, and even Invasion From Inner Earth managed to make you consider the implications of its alien invasion!
That’s not a very constructive critique, but the upshot is that, to ol’ Burl, there was an ineffable something missing from this picture - maybe just the sense of something ineffable, if you follow! Nevertheless, it was tremendously enjoyable and strongly accomplished in almost every department! The creatures are especially impressive! Altogether a great addition to the alien-invasion genre, and I offer Attack the Block three parties at the zoo!
Posted by Burl at 09:33