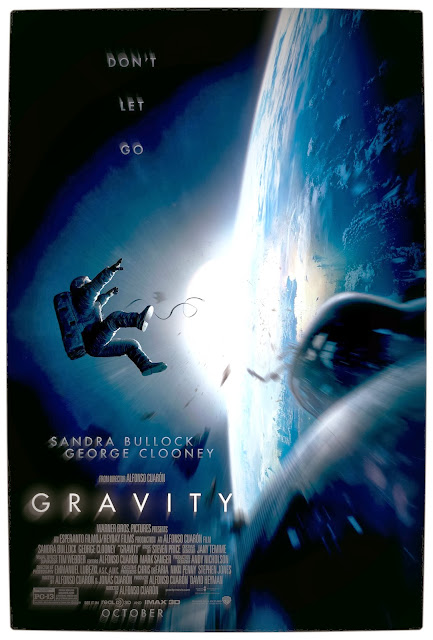 Burl to Houston in the blind, ha ha, I’ve got a movie review for you! Yes, it’s of a new picture, Gravity, a rocketship movie that gives you the mindboggles thinking about how they made it! I heard that someone interviewed the director just after it came out and asked him in all seriousness whether it had been difficult making a movie in space! Ha ha!
It’s easy to think that this person must have been a real simple simon, but for great stretches the space setting is pretty convincing! The story is uncomplicated: two astronauts are floating above the Earth and are doing some work on a satellite, and suddenly some debris destroys their shuttle and they’re left floating around with their oxygen supplies dwindling and no immediate means of terrestrial return! The rest of the story is about trying to get back home, natch!
It’s a pretty popular movie, so I won’t say all that much about it! I was certainly impressed by the trick effects, though it’s my prediction that some of them, mostly the action bits like the shower of debris and the return to Earth, will look fakey and dated in a few years’ time! The smaller-scale stuff, like the spacewalking and the scenes indies the spacecrafts, will hold up just fine! That’s ol’ Burl’s prediction!
The acting will hold up as well, I suppose! I’m no great fan of young Miss Bullock (though of course she was excellent in Demolition Man), but I have no complaints about her here! Now that I think about it, I’ve only seen about five of her movies: The Vanishing, The Net, Speed, Speed 2 and of course the aforementioned Stallone picture, and now Gravity! That makes six, and looking through her filmography, there’s not many others I’d even consider watching, ha ha!
The young Bullock is the main show here, but the rest of the teeny cast is fine too! You’ve got your George “The Descendants” Clooney portraying the merry space trucker who keeps his head about him and comes to a very Dark Star conclusion; and in a clever move, the voice from Mission Control is played by Ed Harris, who of course is best known for his role as Hank in the ‘Father’s Day’ segment of Creepshow! Ha ha!
That’s about all I have to say about Gravity! I enjoyed watching it, thought the hole-through-the-head guy was a nice touch, and was pleased that it clocked in at a tight 90 minutes – a very rare running time for today’s space epics! For technical daring and innovation, for not ignoring the small moments, for defiantly ignoring studio executive dictates, and for successfully promoting the act of theatergoing (because the reviews correctly stated this was a movie to be seen on the big screen), I’ll award this picture three Marvin the Martian cameo appearances!
Posted by Burl at 18:04

Email ThisBlogThis!Share to TwitterShare to FacebookShare to Pinterest
Labels: 21st century, action, disaster, saw it on the big screen, sci-fi