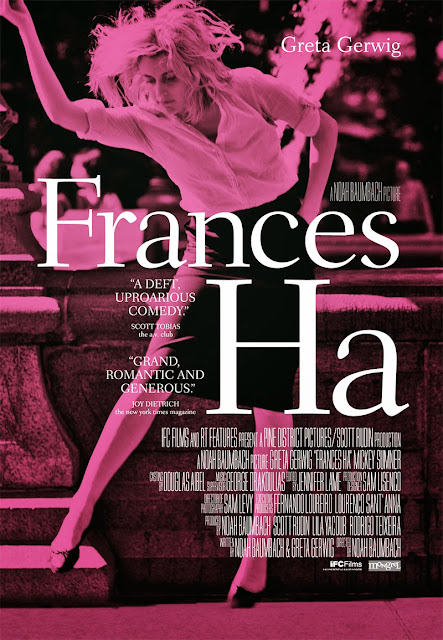 Ha! That’s right, it’s time to review a movie whose title contains one half of my catch phrase, so I thought I’d give it the other half it so richly deserves! The picture of course is Frances Ha, which I was intrigued to see when I learned that it was at least in part a tribute to the great French New Wave pictures I love so well!
And certainly it wears this influence on its sleeve, as it uses a lot of music from those films, stuff from The 400 Blows or some of the sweeter Georges Delerue work! I thought this was a nice touch, and it gives the picture a classic feel it might otherwise not have managed! The black and white photography is another apposite touch!
It’s a character piece, mainly: the tale of the eponymous 27 year old lady making her way the only way she knows how in the Big Apple! She lives with her dearest pal and dances for her dinner! That’s a tough way to make a living, and Frances doesn’t ever have much money, but she has fun anyway! She attends parties and gallery openings and does lots of playfights with her pal!
But things start to fall apart a bit, ha ha! She breaks up with her boyfriend, which itself doesn’t trouble her overmuch; but then her pal Sophie, who makes a lot more money than Frances, takes a different apartment! Frances is left to do a bit of apartment hopping and job searching too! Ha ha, and then the squirmy fun, if you want to call it fun, comes from observing her string of poor choices and frequent lack of self-awareness!
She takes an ill-advised two-day trip to Paris, more to reinforce the New Wave connection than for any narrative reason, and is forced to find other ways than dancing to make ends meet! (It still doesn’t seem realistic that she could, considering the credit card debt we see her rack up!) But eventually she matures somewhat and takes a few belated but definite steps into adulthood!
It’s a pretty good movie if you like anxiety and awkwardness and stressing about money! Ha ha, and who doesn’t? Occasionally, as when she tries to playfight her new, reluctant roommate, her cluelessness borders on some kind of mental disability or emotional infirmity! In any case, it ceases to be believable! But the acting is good, and the French New Wave stuff certainly pushes ol’ Burl’s buttons! And I enjoyed the black and white photography and the gallery of NYC locations!
The picture was a solid indie effort, I guess you’d say, and it had plenty of nice touches! I’m going to award it two and a half subway platform micturations!
Posted by Burl at 14:00