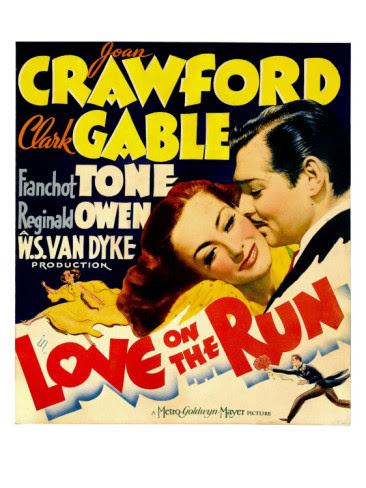 Well a ha ha and a jolly hello, my screwball pals! Here I am with another movie review for you, this time of a hoary old picture called Love on the Run! Ha ha, even reading the back of the VHS box I could tell this was a picture that had been made in the wake of It Happened One Night, with the addition of some would-be Hitchcockian cloak-and-dagger!
Clark Gable, well known from his performance in Soldier of Fortune, plays good old Mike Anthony, a newspaper reporter on assignment in England! He’s bunking for some reason with his quasi-pal and top journalistic rival Barney Pells, and gets hornswoggled into covering the society wedding of poor little rich girl Sally Parker, played by the lovely Joan “The Unknown” Crawford!
Through a series of unlikely events, which are the only sort of events you’ll find in this picture, Mike and Sally don big shapeless flight suits and take off in a stolen experimental aircraft bound for the Continent! Barney Pells, hungry for his own big scoop, trails along in a Terminator-like pursuit! And the owners of the plane, it turns out, are some species of spy; ha ha, Bolsheviks no doubt! They’re all after a particularly weak McGuffin, a map which gets mentioned maybe three times through the picture!
The picture has some great patter from Gable and Crawford and from Franchot Tone (Mr. Crawford at the time) in the role of Barney Pells! But the whole thing is such a wisp of a scrap of a titchy-mitchy-fitch of a thing that, charming as it frequently is, it never gains any traction! There’s a scene in the middle in which our pair of runaways find themselves at a palace, possibly Versailles, where they break in and change into the clothes they find there! Well, of course the security guard, played by Donald “Mark of the Vampire” Meek, takes Gable for the Sun King himself and Crawford for his consort, and they all do a little dance that stops the movie cold!
There’s romance and also a series of outrages perpetrated against the gullible Pells, and occasionally the cod-Hitchcock elements assert themselves, but poorly! I’d say the picture is about 65% It Happened One Night and the rest is trying to be The 39 Steps, and it doesn’t come near to either of them! But it’s not without wit, and the stars have charm, and it’s hardly a total loss! The movie was directed by Woody “One Take” Van Dyke, who of course also brought us Another Thin Man, and the job he does here is professional but rather bland!
It’s a poufy entertainment and nothing more, but if it comes on The Old Movie Channel and you’ve got nothing pressing to do, you might as well sit back and watch it! I give Love on the Run two invisible dogs!
Posted by Burl at 22:03