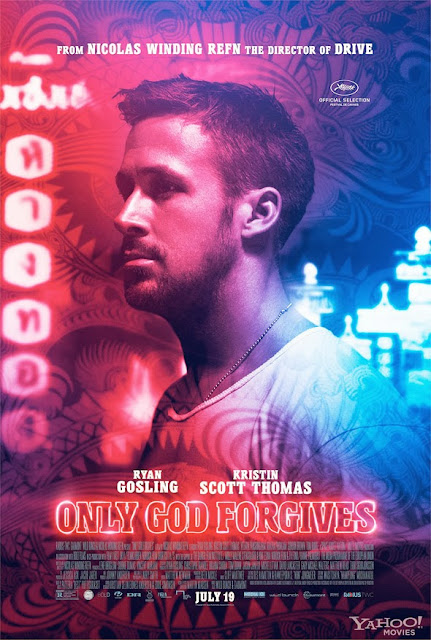 Biff bang boom, it’s Burl! Ha ha, I’m here to review another picture for you – a particularly garish picture, all blood reds and aquarium blue! It’s a picture from the famed Scandinavian stylist Nicolas Winding Refn, who brought us Drive and Bronson and Pusher and other single-word productions, most of them pretty violent! Only God Forgives is no exception!
Ha ha, I expected it would be violent, but it was even more so than I’d thought! It’s right up there with The Mutilator and other Special Makeup Effects productions like that! It seems there’s a family of American drug dealers who’ve set up shop in the neon section of Bangkok, using a boxing club as their cover! There’s Billy, the oldest brother, Julian, the taciturn younger brother, and Mom, who holds her cigarettes like she’s watched too many Joan Crawford pictures!
The story begins when Billy, who is apparently crazy, murdering a teenage girl! An unprepossessing policeman, Chang, allows the girl’s father to take his delight in Billy, which in this case means clubbing the young psycho to a pulp with a table leg! Then Chang metes out a little more rough justice on the father, who was also his daughter’s pimpsman! And then comes Mom’s retribution for her son’s death, after which further bloody events take place! Ha ha, it’s Chang who retains the upper hand and commits most of the mayhem!
At one point, Julian, whom we assume to be a real punch-artist, challenges droopy-dog Chang to a fight! Well, ha ha, the young roundeyes lands not a single blow, and the elderly Thai puts such a punching on Julian, ha ha, such a punching! Chang then doles out more of his signature punishment (some of it quite welcome!), and by the time he’s done, there aren’t many characters left, and those who remain are short a limb or two!
All of this is enacted with a rather hilarious air of self-seriousness, but also a great deal of pictorial beauty! There was not much ol’ Burl could hang his hat on as far as emotional engagement went, which was clearly by design! Ryan Gosling, who plays Julian, could have stirred embers with his facial expressions, and he speaks hardly a word through the whole picture!
It’s a gaudy, sleazy, nasty and frequently gorgeous world the young Refn has created, but one with about the half-life of good latte art! It’s pure and unashamed genre pulp, which is what I liked about it, but it was missing the energy one associates with the form, and that I didn’t like so much! And the puffery was a bit too much! It almost fits into that category in which I place movies like Enter the Void and Holy Motors, a category I call Ha Ha, How The Heck Did This Ever Get Made??? But it’s rather a thin broth compared to those, so I’m going to give Only God Forgives two and a half horrible pokings!
Posted by Burl at 21:21