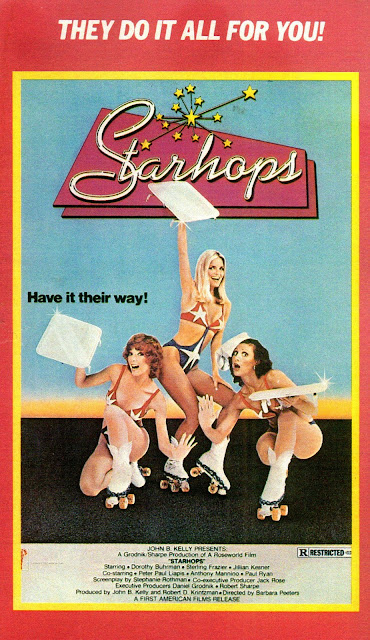 Ha ha, it’s Burl again, with a review of an extremely unusual sex comedy picture! Did you know that not all sex comedies were made by men, just 99.5 percent of them? It’s true! One of the few examples of such a movie made by a lady is the other big carhop picture, which came along in early 1978, a couple of years after The Carhops! This new superproduction, written by Stephanie “The Velvet Vampire” Rothman (a woman) and directed by Barbara “Humanoids From the Deep” Peeters (another woman) was called Starhops! “They’ll do it all for you!” the ad copy reads! “Have it their way!”
The movie itself opens as a Star Wars parody, from the title to the star field under the credits, to an attempt at mimicking the sci-fi hit’s famous opening crawl! We’re thrown into the saga of a failing drive-in restaurant owned by none other than the fantastic Dick Miller from The Happy Hooker Goes Hollywood and A Bucket of Blood and oh so many more! Surrounded by bill collectors, mortgage officers, alimony-hungry ex-wives and psychotically truculent customers, Miller comes believably unravelled, screaming and tearing the place apart, then selling it lock, stock and grease-barrel to his carhops, Angel and Cupcake! These ladies then stumble upon Danielle, a French “kook” and graduate of the Cordon Bleu school of cheffery in Paris, and all together use their feminine wiles to cadge a bank loan and free carpentry from a succession of drooling males! Ha ha!
Christened “Starhops,” the new restaurant is an immediate success, due in no small part to the incredibly scanty outfits the girls wear at work! A minor plot kicks into gear when a crazed oil magnate takes a shine to the property, intending to buy it and put up a new futuristic gas station! The ladies, of course, are unwilling to sell, so the old oilman sends his fey dingbat son Norman in as an undercover carhop! Norman’s job is to ferret out illegal or unsavoury goings-on at the drive-in, but none are forthcoming, so, ha ha, he must resort to sabotage! This takes the form of tossing frogs in the salad and rats in the stew just as the health inspector comes by! (Since when do drive-ins serve salad and stew, anyway? Ha ha!)
But, as already seen, these ladies know how to use their wiles, as well as their breasts! Cupcake uses hers on Norman to extract a confession and bring him on side to plot against Daddy! Other romances are blooming too in the meanwhile: a fearsome biker named Kong has taken a shine to Danielle, and the button-down architect responsible for designing the newfangled gas station also defects from the oilman’s team in a Hasslehoffian bid to save the drive-in and woo Angel! After some slapstick, a touch of mild nudity, a lot of car stunts, a few farcical misunderstandings and an explosion, the old man’s plot is foiled and he’s hauled off to the loony bin where he belongs! The movie ends in the best and only way it could: with a pool party!
It’s a likeable little picture I suppose, though perhaps lacking in the zing you might be hoping for from such a confection! Still, it has two elements which raise it above average! One of course is Dick Miller, who gets to have a great freak-out and strangle a guy Homer Simpson style! Ha ha! The other is the guy Miller strangles, a drive-in customer so loathsome that you only wish the banty little Miller was allowed to finish the job! He's played by Matthew Bright, who would go on to direct movies like Freeway and Tiptoes! Bright gets a good line while complaining about the golf pencil he finds in his French fries: “I coulda turned purple! I coulda become terrified and died!”I give Starhops two and a half Fronsh cookies!
Posted by Burl at 15:28